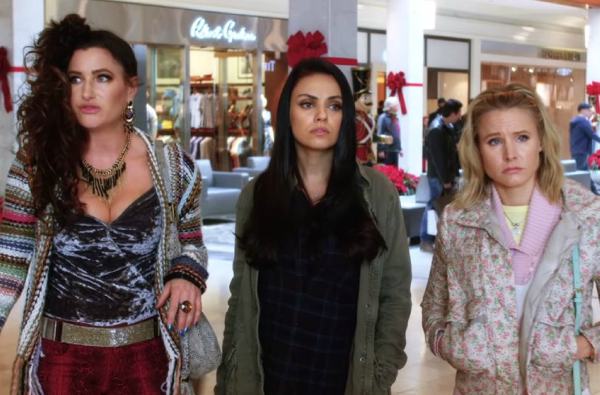 A year later, we learn that the Bad Moms, played by Mila Kunis, Kristen Bell and Kathryn Hahn, are all the product of bad parenting. As if that wasn’t already obvious, we get a movie where their overbearing mothers (skillfully played to the hilt by Susan Sarandon, Cheryl Hines and Christine Baranski) taunt their daughters during the Christmas season. It’s all very obvious and goes through the motions but hilarity does not ensue very much.

Early into the film, Baranski’s Ruth tells her daughter Amy (played by Kunis) that her efforts are “lazy and embarrassing,” which is also a way I’d describe this movie. There are enough scattered laughs and sincere performances to make it tolerable. Yet, the worst scenes are so cringe-worthy, I wonder why no one in the talented cast intervened and suggested trying something else.

This plays like an R-rated sitcom with F-bombs instead of a laugh track. Had it been consistently funny, all would be forgiven. Instead, big laughs are surrounded by blocks of scenes that don’t work.

Despite being a massive sleeper hit, I wasn’t crazy about the first “Bad Moms,” though it had better momentum, more laughs and included a tasty rivalry between Amy and super-mom Gwendolyn (played by Christina Applegate, who only has one funny scene in the sequel).

Kunis is once again playing the straight role, which is a shame. In “Forgetting Sarah Marshall,” she was a comic spitfire but here, she mostly just reacts to all the funnier characters around her. Hahn easily steals the movie and, for possibly the 20th time, demonstrates that she is so dazzling in every scene, utterly talented and genuinely beautiful, she needs to be in starring roles and not stuck in supporting ranks. I really like Bell’s character in these movies but, for some reason, this franchise keeps bottling her up and not fully utilizing her. Because the showcase for the three leads is lopsided (too much of Kunis, just enough of Hahn and not nearly enough of Bell), their team up feels unrealized yet a second time.

The new moms are so well played by a wonderful trio of actresses, you can almost overlook how unlikable their characters are. The terrific Oona Laurence, so good in “The Beguiled” and “Pete’s Dragon,” is stuck in a nothing reactionary role as Kunis’ daughter. Meanwhile, Peter Gallagher’s supporting role as Amy’s father seems to have been trimmed away in the editing room.

There’s real cracked inspiration during the waxing scene between Hahn and “This Is Us” star Justin Hartley, playing a too-good-to-be-true exotic dancer. The absurd touch of having Hartley never flinch while Hahn repeatedly yanks tape off of his genitals is an uproarious gag. It’s easily the film’s raunchiest scene and its executed with a fiendish cleverness that eludes the rest of the movie.

The big emotional payoff the younger moms share with their mothers in individual scenes is so well performed, the injection of real emotion pays off. Yet, the chance to introduce slapstick at almost every turn keeps this at the level of a bad “Pink Panther” sequel.

As much as I’d love to see a Skyzone on Maui, the extended product placement for the company is pretty ridiculous. So is an initially funny running gag with Kenny G that turns into an Elton John in “Kingsman: The Golden Circle”-level of comic miscalculation. Kenny G’s hilarious turn in “Michael Bolton’s Big, Sexy Valentine’s Day Special” (one of the year’s biggest Netflix sleepers) is preferable to how he’s handled here.

Here’s yet another holiday-based comedy that badly wants to be “National Lampoon’s Christmas Vacation” and never comes close. I liked how “Bad Moms” criticized the ultra-busy soccer mom/PTA meeting regular/Starbucks-gulping lifestyle. While “A Bad Moms Christmas” aims to declare Christmas a fake, consumerist nightmare for overburdened mothers, the final scenes still resemble a twinkly Hallmark card. For all the slow motion montages depicting gleefully bad behavior, the Bad Moms never really trash the yuletide season as thoroughly as they should. “A Bad Moms Christmas” should have been wilder, more comically bold and much funnier.

'A Bad Moms Christmas' has no comments