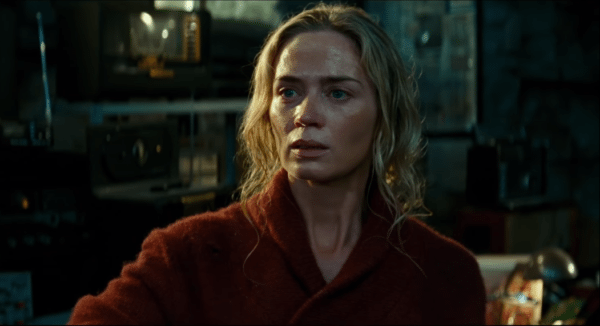 The introductory scenes of “A Quiet Place” allow the audience to enter a world so intriguing, many will find themselves obeying the film’s core rule to remain silent. The film opens on “Day 89” of a world where humankind appears to have either gone missing or become mostly extinct. As a man (played by John Krasinski), his wife (played by Emily Blunt), and their three children (played by Millicent Simmonds, Noah Jupe and Cade Woodward) walk from a deserted town to their house in the woods, they’re careful to only step barefoot and not utter a sound. Why? Because of a monster that might appear and turn their silence into screams. Later on, the father gravely reminds his son, “Small noises are okay…big noises bring danger.”

While “A Quiet Place” is so much more than just a horror movie, it excels as an outstanding example of its genre. Suspense is effectively created in most films by the absence of sound; here, since every scene (even those where no threat seems to exist) hinges on how quiet this family can be, Krasinski keeps his audience on edge from start to finish. In an age of notoriously obnoxious, chatty moviegoers, Krasinski, God Bless Him, has made a movie that strongly encourages (if not altogether requires) audiences to shut the hell up.

There are bits that reminded me of “Aliens” and “10 Cloverfield Way”, as well as M. Night Shyamalan’s “The Village” and “Signs” but, appropriately enough, it’s the family dynamic that gives this the most dramatic power. There hasn’t been an extensive use of American Sign Language in a mainstream American film since “Children of a Lesser God.” In fact, there is very little spoken dialog, as the majority of exchanges are delivered in ASL and presented in subtitles. The back and forth between the children and their parents are refreshing, emotionally rich and moving.

The key to Krasinski’s success as an actor has always been his eyes: his droll, hilarious close-ups as Jim Halpert on “The Office” would have worked in silent comedies. Here, he says little but his expressions capture the paternal love and barely concealed desperation of his character. Blunt is excellent and carries some of the film’s most grueling set pieces. Jupe is touching in his shared scenes with Krasinski, in which a boy struggles to control his fear in front of his father. However, Simmonds’ performance and character provide the film with its heart. Simmonds, who is deaf in real life, conveys a daughter who fears she has forever lost the bond she shared with her father; the emotions and character dynamics between the parents and their children feel authentic and complex.

Everything about this production is outstanding, though the sound design is especially remarkable. The only thing in the entire movie that I didn’t like was seeing Michael Bay’s name in the ending credits: yes, the bombastic cinematic ringleader of “Bay-hem’ is the film’s executive producer. This and  “Ouija: Origin of Evil” are the only great films to come from Bay’s Platinum Dunes production company to date. Bay is very, very lucky to have his name attached to a film this strong.

Krasinski’s third film as a director never steps wrong. Fans who have noted his impressive dramatic work in films like “Promised Land” and “15 Hours” will, nonetheless, be startled by what he achieves here, in front of and behind the camera.  When one considers the unique demands the filmmakers faced (a horror tale blended with a family drama, presented mostly in ASL, via a tour de force sound design), it makes the end result all the more extraordinary. Krasinski has fashioned a perfect little masterpiece.

'A Quiet Place' has no comments