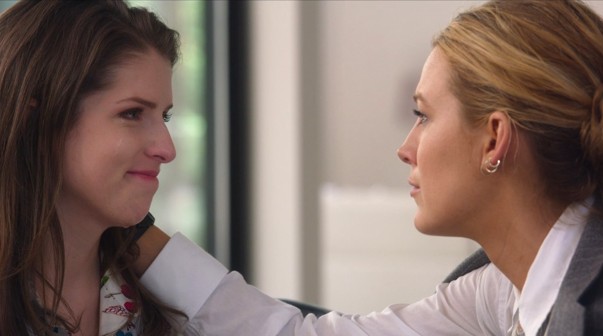 Paul Feig’s A Simple Favor is about how some friendships are so fulfilling and unexpected, we can’t believe our luck. When Stephanie, a widowed, lonely “supermom” (played by Anna Kendrick), meets the flashy, carefree Emily (played by Blake Lively), she’s visibly amazed that a wealthy, sophisticated figure in the fashion world would take an interest in her. Emily, who is uninhibited and outspoken, brings out a long dormant sense of empowerment in Stephanie. The two bond profoundly over time and, despite how different they are, they become close and rely on one another… until the day Emily disappears.

Feig’s return to form is one of the year’s nicest surprises: a delicious, sexy, and rather addictive mystery. A key to its success is how Feig’s confident direction manages a perfect control of tone, allowing comedy to organically breathe into the space of a dark tale. This isn’t a comedy or even a “comic thriller,” but a genuinely twisted murder-mystery puzzler that just happens to sport characters who are naturally funny.

The distinction is key: most comedies push the jokes and present a bouncy tone, announcing their lightness and keeping the audience feeling safe, because, hey, we got jokes! While not similar in terms of content, A Simple Favor reminded me of John Landis’ An American Werewolf in London or John Carpenter’s Big Trouble in Little China, which weren’t comedies but had characters so hilarious, the humor surprises and comes from a genuine, unforced place. Smart, character-driven comedy in the face of a sinister plot was exactly what was missing from Feig’s failed 2016 Ghostbusters remake.

Kendrick and Lively have never been better, with Kendrick in a unique character role that brings out the best in her acting instincts, while Lively gives a forceful, richly humorous turn. After appearing in three Pitch Perfect movies (possibly the worst movie trilogy since Big Momma’s House) and failing to deliver on the promise of her Oscar-nominated work in Up in the Air, Kendrick finally reaffirms her considerable talent and connects with a vehicle that suits her.

The feel of a neo-noir crime thriller connects, as Stephanie’s search for her best friend makes us realize the hard truth about her newfound friendship – it’s not about building a case as much as learning how little she thought she knew about the person she admires the most. The cinematography by John Schwartzman (who filmed everything from Pearl Harbor to Jurassic World) and score by Theodore Shapiro are excellent at creating a modern thriller with a nod to the classics (Diabolique, in particular, is openly referenced). Jessica Sharzer’s screenplay (adapted from the Darcey Bell novel) keeps the give-and-take constantly funny and, even when I could guess an upcoming twist, I was still engrossed in the telling. The soundtrack is full of eclectic song choices, ranging from Brigitte Bardot to Cypress Hill, which keeps this feeling fresh and offbeat.

It’s a shame the ending doesn’t work. While the plot doesn’t cop out in the final stretch, the tone ultimately does. The overly jokey, campy final reveal and epilogue are unworthy of the strong buildup. While most of this plays like the best of “Big Little Lies,” the finale is reminiscent of “Desperate Housewives” at its worst. Although the conclusion doesn’t ruin the movie as a whole, it does keep it from soaring as high as it could have.

Despite a weak finish, this is easily one of the biggest sleepers of the season and a strong return to form for Feig and Kendrick. An uninspired trailer and poster campaign improperly sold this as a farce, when it actually would make a fine double feature with Gone Girl.

'A Simple Favor' has no comments