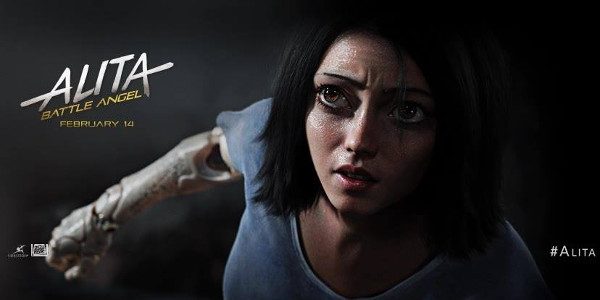 According to David Hughes’ “The Greatest Sci-Fi Movies Never Made,” James Cameron spent ten years after “Titanic” pondering what to make next before ultimately deciding on “Avatar.” During that period of indecision, Cameron came this-close to directing “Terminator 3,” “Spider-Man” and “True Lies 2.” “Alita: Battle Angel,” had also been floating around the rumor mill as a Cameron pet project to be made post-“Avatar.” Now, with Cameron serving as co-screenwriter and executive producer to director Robert Rodriguez, the end result is imperfect but still a potent blast of sci-fi razzle dazzle.

Rosa Salazar stars in the title role, a robot fused together from dissimilar parts by a compassionate doctor (played by Christophe Waltz). As Alita slowly recalls her past life, she realizes her value as a warrior and embraces the human qualities within her heart…which she occasionally pulls out of her chest to make a point.

“Alita: Battle Angel” isn’t existentialist sci-fi, like either “Blade Runner” or “A.I. Artificial Intelligence.” When the question of whether Alita is in love comes up, the characters (and the movie itself) take it at face value. There is nothing philosophical or intellectual about how the film portrays the ethics of its robotic and/or cyborg characters. In fact, there’s something refreshingly straightforward about how Rodriguez has fashioned a trashy, cyberpunk action/sci-fi popcorn movie. Take it or leave it.

Cameron’s 2000-2002 TV series, “Dark Angel,” which starred Jessica Alba in her breakthrough role, now appears to have been a dry run for this far more elaborate take on similar material. Cameron’s best collaboration as writer/producer on material directed by someone else is still “Strange Days,” the amazing, confrontational 1995 thriller helmed by his ex-wife, Katherine Bigelow. Rodriguez doesn’t finesse the pulpy qualities of the material; in fact, despite the colossal price tag, this shares the lovingly fused together, homegrown quality of his “Spy Kids” movies (note how, despite the fantastic settings, “Alita: Battle Angel” was filmed in Rodriguez’s Austin, Texas hometown).

There is a lack of depth to the human characters and a connect-the-dot quality to the screenplay (Gee, if they establish “murder ball” in act one, surely there will be a tournament in act three, right? Yep). Waltz is miscast and appears to be emotionally disconnected from his character. While Connelly and Ali are strikingly attired, exactly what their characters are doing and how they fit in with the evil plans of the off screen “Nova” aren’t entirely clear.

Thankfully, the fight scenes are exciting, Alita is an endearing character and, most crucial to the film’s success, Salazar is completely charming in the role. Initially, the character is so earnest, the sentiment seems overwhelmingly gooey. As the story progresses, Alita takes on a welcome edge. However, like adorable movie characters ranging from E.T., Dobby and Johnny Five, Alita has really wide eyes that offer Bambi-like expressions.

The visual effects are so ambitious, I didn’t mind that not every moment convinces. If anything, the close-ups of Alita are so remarkable and life-like, I always believed in the character.

A big set piece in the third act, which plays like a cross between Rollerball” and the “A.I.” Flesh Fair, is crafted with the blend of thrills and chaos that defines Rodriguez’s best work. Rodriguez has come a long way from his early films- the combined budgets of his wonderful Mariachi trilogy still wouldn’t come close to the reported $200 million cost of this one. Yet, there is a gruff, wily quality to “Alita” that doesn’t betray his indie routes. Rodriguez hasn’t made an impersonal or safe Hollywood product. In fact, this is so violent, the PG-13 seems especially ill-suited for all the carnage and unsettling imagery.

With its open-ended final scene, both rousing and a tease for more to come, this concludes with a welcome (though admittedly iffy) invitation for a series of subsequent episodes. If a cult following ensues and Salazar returns as Alita, I’d welcome more of this wonderful character.

'Alita: Battle Angel' has no comments