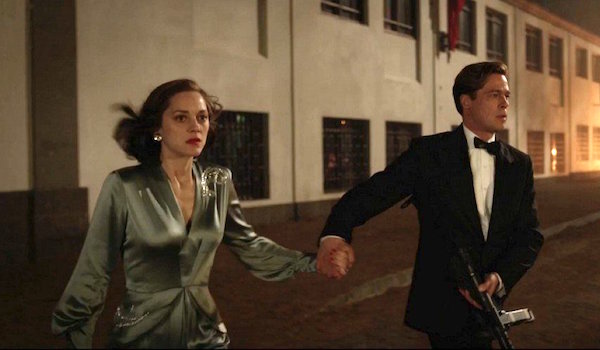 World War II has always been an era full of stories of amazing heroism, battlefield derring do, and even romance. “Allied”, the latest from director Robert Zemeckis, is attempting a classic WWII romance in modern day in the vain of Casablanca. Can Zemeckis make audiences swoon with nostalgia as he directs Brad Pitt and Marion Cotillard as agents destined for romance during WWII whose common enemy may be the person lying beside them?

“Allied” is the story of Royal Canadian Air Force Intelligence Officer, Max Vatan (Brad Pitt) who is sent to Morocco to assassinate the German Ambassador. He asked to pose as a married man and partner with a French Resistance fighter Marianne Beausejour (Marion Cotillard). These two reluctantly work to together for a common cause. This mission’s success has Max looking at Marianne in a new light. He asks her to move to London, where they get married and have a young child together. Not long after their whirlwind romance, Max is contacted by the espionage arm of British Intelligence who tell him that his wife is a German spy only posing as Marianne Beausejour. Max is asked to prove his wife’s guilt, but is insistent on proving her innocence even if it comes at defying direct orders to execute her if it is proven she is a spy. Can Max separate the progress that he and others made in the European theatre of WWII without sacrificing his new life, love, and family?

“Allied” is a romance disguised as a WWII film. Brad Pitt and Marion Cotillard are a wonderful pairing, who share a believable on screen romance. The film is beautifully shot and is a throwback to films made during the WWII era. The story is “Allied’s” biggest issue. It moves at a pace that for some may seem as plodding and could take them right out of the film. “Allied” suffers from a few plots that seem more convenient as opposed to a more natural progression. For example, Max is intent on finding the one man that has actually seen the “real” Marianne, but once Max confronts him the man has been blinded by an injury in the field. Plots like this pulled me out of the story and unfortunately sets up the finale in a way that should have been more of a jaw dropper, but felt more like I saw that coming.
“Allied” isn’t a bad film and that’s the problem. A movie with such a stellar pair of actors, a great director and a worthwhile story should’ve been on any critics “best of” list, but instead is relegated to being a watchable film on a Saturday afternoon on HBO. I may have been expecting too much, but if a film like “Casablanca” is your template, the delivery should be nothing but perfection.

'Allied' has no comments