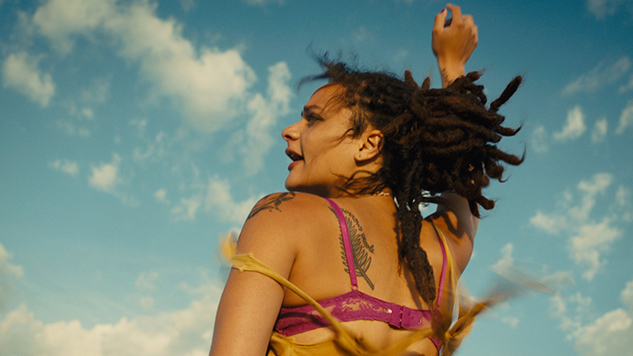 AMERICAN HONEY, won a top prize at the Cannes Film Festival and is getting lots of rave reviews, but I don’t think that main stream audiences will be so enthusiastic.

The movie focuses on an impoverished young girl who joins a roving crew of other unwanted teenagers who sell magazine subscriptions door to door. It’s shot documentary style with mostly non professional actors doing lots of improvisation, and it really captures the exuberance of these kids who revel in alcohol, marijuana, and popular music. But AMERICAN HONEY has very little plot and it goes on way too long—2 hours and 40 minutes. Sasha Lane as Star first spots her future when she sees a van full of teenagers pass her on the highway while she’s hitchhiking. Moments later she encounters them again inside a Kmart where she is immediately drawn to Shia LaBeouf as Jake, the leader of the misfit magazine sellers. The group of kids dances in the aisle to the store’s PA system playing Rhihann’s “We Found Love in a Hopeless Place.” Jake jumps up on a counter and keeps on dancing as an employee calls for security. Director Andrea Arnold discovered Sasha Lane on a Florida beach. Lane had never acted before, but amazingly, she is the glue that holds this somewhat incoherent movie together.

Jake: It’s a business opportunity. We go door to door. We sell magazines. We explore like America. We party. Come with us. The woman who carts this crew around the midwest is Krystal played by Elvis Presley’s oldest granddaughter, Riley Keough.

What little plot AMERICAN HONEY offers is the story of Star’s on again, off again connection with Jake whose feelings for Star conflict with his obligations as a boy toy to Krystal. Krystal: You think you’re special. You don’t mean nothin’ to him. For her part, the rebellious Star, who has left her half siblings and lecherous step dad behind, doesn’t like lying to sell magazines. She figures she can make money her own way. Star takes off running to catch up to a car full of middle aged cowboys.

We don’t really get to know the other kids in the crew though we see lots of them singing and dancing and whooping it up. In fact, much of the movie is like an extended music video.

If AMERICAN HONEY had a strong plot with a real ending, I’d urge people to see it. But as it is, the movie is just too long and too shapeless for me to recommend it.

'American Honey' has no comments