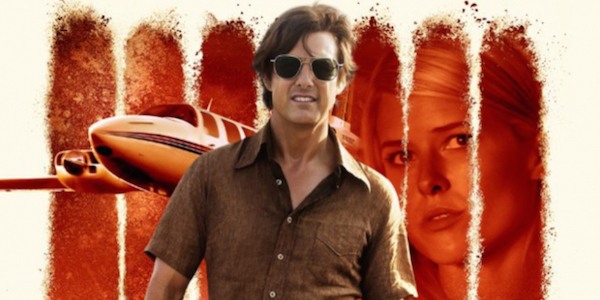 The ability to board your own aircraft, operate it with the ease of an automobile and go wherever you want, whenever you want and over vast fields and towns below, is just so cool.

It’s one thing to be a passenger who enjoys looking out the window and actually enjoys air travel (especially now, when going to airport is a decathlon in discomfort). It’s another thing entirely to be in the cockpit, controlling a massive aircraft, carrying hundreds of people, and capping their experience with “Welcome to Miami” as they depart.

Doug Liman’s “American Made” is one of those rare movies that gets how sexy and grand being a pilot is. Yes, pilots and air travel in general can be sexy. After all, let’s not forget the suggestive and catchy slogan that National Airlines used to boast in their ad campaign: a smiling flight attendant would declare, “Hi, I’m Tina…Fly Me!” Recent films like Martin Scorsese’s “The Aviator” and Steven Spielberg’s “Always” are among the few that not only offer stunning aerial footage but really get the attitude, feel and look of those who fly daily. Those films also understood that there’s something undeniably erotic about the thrill of being miles above ground.

This amazingly true story stars Tom Cruise (who more than redeems himself from the embarrassment of “The Mummy”) as Barry Seal, a carefree commercial airline pilot who is selected by a CIA agent (well played by Domhnall Gleason) to fly top secret missions. Seal initially sticks to the plan but finds himself doing business with figures like Pablo Escobar and Manuel Noriega. Over time, the money and temptations for trouble start to pile up.

Liman hasn’t made a film this loose and wild since “Go,” his 1999 sophomore effort. Despite being a depiction of criminal activity, moral corruption and illegal financial gain, this all plays much funnier than expected. Although Seal’s do-or-die lifestyle of success, excess and an inevitable downfall has thematic parallels with movies like “Goodfellas,” this plays like an especially playful and irreverent Oliver Stone film.

Cruise begins the role in his comfort zone, playing Seal with his trademark grin and coming across as cocksure and impenetrable as he does in interviews. The crazier the story gets, the more reactive Cruise’s performance becomes. Even with a middling accent, he’s solid showing us how this master of his universe succumbs to full panic mode. The casting is spot-on, as Cruise embodies an all-American success story but doesn’t hesitate to make Seal look foolish when necessary.

Playing Barry’s wife, Lucy, newcomer Sarah Wright is a real find and steals many scenes. Caleb Landry Jones, so good as the younger brother in “Get Out” and as Amanda Seyfried’s boyfriend in “Twin Peaks- The Return,” is hilarious as Lucy’s brother, “JB”.

The depiction of the late 1970’s-mid-1980’s is both a spot-on recreation (or, at least, how I remember it)but also resembles a goofy political cartoon. The approach works, as we live vicariously through Seal, relishing his close calls and never fully judge him as we should (he’s hard to dislike when he’s played by Mr. Charisma). Although the clever screenplay by Gary Spinelli is telling a true-life, politically charged adventure yarn, leading up to an explanation of the Iran-Contra Scandal, it’s the comedy that resonates the strongest.

To own up to a slight bias, I also dug “American Made” because, in addition to being one of the best films ever made about aviation, it also has a big movie star playing someone cool named “Barry.” Seriously, it been a dry spell for me (the low point may be discovering a movie about a hopeless loser called “Someone Marry Barry”). Finally, Tom Cruise, the All-American movie star, spends two hours playing a guy with my first name. Now, I can die happy.

'American Made' has no comments