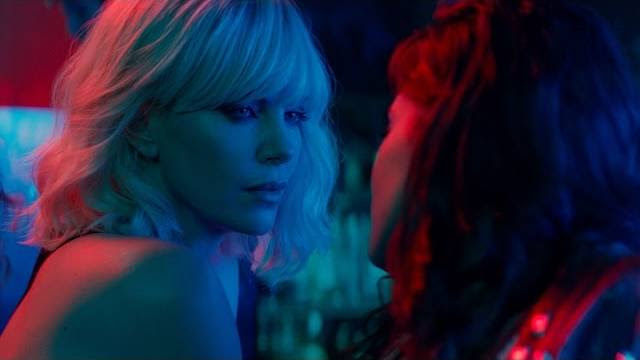 Charlize Theron stars as Lorraine, a well-trained spy who kills a lot of bad men in 1989 Berlin. Her latest mission, set before and after the fall of the Berlin Wall, involves joining up with a sketchy colleague named Percival (played by James McAvoy). How tough is Lorraine? After each bad guy tussle, she ends her day in an ice bath and drinking a bottle of vodka.

The plot to “Atomic Blonde” is intricate but really not important. Yes, we’re meant to get involved with all the double-crosses, tense interrogations, secret recordings, figurative and literal back stabbings and we do. Still, if you watched this minus the dialog, the film’s strengths would still come into focus. This is a movie about how stunning Theron’s silvery locks appear by the glow of pink neon, how sexy she looks cleaning her gun with very little clothing and how great she appears while strutting to “Blue Monday.” If that makes this sound shallow, self satisfied and smug, that’s because it is, but it shouldn’t matter. If you loved “Drive,” here is the same movie starring a female lead and a different B-movie plot but much of the same goals.

Theron’s character is cold and distant at the start of the film and is perhaps 2% less remote and indifferent by the film’s end. Nevertheless, her character is defined by her ability to look gorgeous, kick men in the face, then flee the scene of the crime, which Theron is excellent at. Like director David Leitch’s previous film, the first “John Wick,” we’re here for the attitude, the look and extraordinary staging of characters inflicting blunt force trauma.

Of the handful of extended, thrilling and very rough fight scenes, my favorites are the bit involving a deadly use of bungee chord (or just really flexible rope) and a manufactured one-take shot where the camera follows Theron as she mangles assailants up and down staircases. The R-rating is meant to be taken seriously, though the much touted lesbian sex scene has apparently been edited down by Edward Scissorhands and is nothing to get excited about. In fact, the entire lesbian subplot is slim and poorly defined. How quaint and very ’80’s that this movie shows zero hesitation in busting heads but is curiously skittish about showing two women being affectionate with one another.

While most won’t be familiar with the graphic novel source material (Antony Johnston and Sam Hart’s “The Coldest City”), this is a fine example of the genre. From the too-cool opening credits (marked in graffiti splashes) to the framing, slo-mo punctuation during the fight scenes and overlapping scenes, the comic book aesthetic is in clear view. This has what any good comic book movie needs: a director who honors the original material but makes it their own and adds the necessary texture, style and immediacy to make it come to life. This is the best comic book movie of the year so far.

Many will likely enjoy “Atomic Blonde” because it features a smart and striking actress taking charge and kicking ass in a genre that has been a boy’s club for decades. That said, this supposed novelty is nothing new (sorry, “Wonder Woman”). In fact, while I certainly enjoyed this as much as “Salt” and “Lucy,” the best of this type of movie remains Luc Besson’s trend-setting, extremely violent “La Femme Nikita” (1990) and Renny Harlin’s woefully underrated, hilarious and as-nasty-as-it-wants-to-be “The Long Kiss Goodnight” (1996). In those films, Anne Parillaud and (especially) Geena Davis surprised audiences by giving and taking painful body blows, surprised by fully committing to their often vicious characters and gave soul to their roles. Theron, by comparison, electrifies in a one-note part and elevates the character by demonstrating how deadly Lorraine is in any situation.

At some point, the over-use of wall-to-wall, classic pop, FM 80’s hits on a movie soundtrack will become a dead gimmick. For now, its seeming like every other self consciously hip, Comic Con-friendly movie must have a long (and probably expensive) list of recognizable tunes playing throughout the movie. In this case, the songs synch well with the imagery and mostly aide the action. Unlike “Baby Driver,” which fizzled out after a great start, “Atomic Blonde” finishes strong. While there’s no set-up (or a real need) for a sequel, a part two should pit Lorraine against her only true cinematic equal: John Wick!

'Atomic Blonde' has no comments