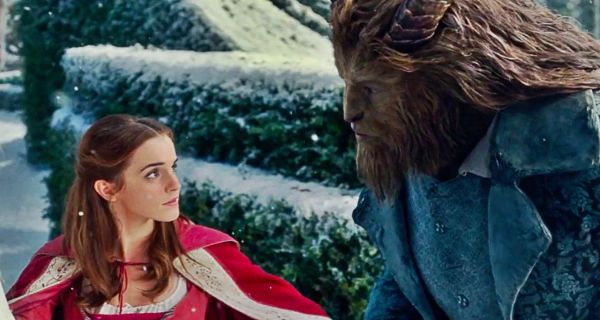 In Bill Condon’s live-action remake of the 1991 Disney animated musical Beauty and the Beast, the story is mostly the same and all the expected ingredients are in place. Yet, everyone seems to be trying too hard to make up for the big gap at the film’s center. This may be the first version of this story I’ve ever seen where I didn’t care about either Beauty or the Beast.

Harry Potter star Emma Watson plays Belle, the town bookworm whose independence makes her stand out. Gaston (played by Luke Evans), an unapologetic narcissist, works overtime to become Belle’s suitor but can’t win her heart. When Belle’s father (Kevin Kline) is imprisoned in a magical castle by a rage-filled Beast (played by Dan Stevens), Belle offers herself to be a captive in her father’s place. Belle and the Beast are “barely even friends, then somebody bends, unexpectedly…”

Things begin badly, with an unnecessary, awkward flashback to the Beast’s origins. Then, the singing starts and I worried that the whole thing would collapse. Watson’s introductory moments are cringe-worthy, as her heavily auto-tuned singing made me long for the just-okay vocals of Emma Stone. Watson’s performance is at medium-speed for the whole movie, as she rarely does more than give her standard half-smirk through most scenes. Watson can be quite good and is positively bewitching in The Perks of Being a Wallflower. As Belle, she’s poorly miscast.

Watson has no chemistry with Stevens’ Beast, as the two barely match the heat of Bella Swan and Edward Cullen. Stevens’ face is covered with a CGI rendering of a hairy monster but it makes him look like talking tree bark. An actor covered in make-up would have been preferable, as the best thing about Stevens’ motion-captured performance is that it sometimes recalls the animation of the 1991 film.

Much of this movie has that problem, as the 2017 Beauty and the Beast in no way matches or surpasses the 1991 animated version. Condon stages some robust musical numbers and the sets and costumes are lovely but watching this just made me want to go home and revisit the earlier adaptation, which did everything right.

Kids who didn’t grow up with the animated version should find this entertaining enough. The “Be Our Guest” number is dazzling, as is the new “Evermore” and the title song is, wisely, as quiet a sequence as it was the first time.

Evans makes a better than passable Gaston, though his performance is mostly a careful mimicry of the animated version and not a fresh interpretation. As Gaston’s lunk-headed sidekick, LeFou, Josh Gad conveys what a creep the character is but isn’t as funny as you’d hope. This is a far cry from Gad’s brilliantly funny work in Frozen or The Book of Mormon.

The outcry around Gad’s character, that he provides the first genuinely “gay moment” in a Disney film, is perhaps the dumbest movie controversy ever. Like Sulu’s much-touted and uneventful “coming out” in the recent Star Trek Beyond, LeFou’s big moment is a quick, who-cares reveal that you’ll miss if you blink.

A note to the Disney Company: if you’re going to unveil your first openly gay character in a motion picture, why not make it someone who is well-rounded, likable and integral to the plot? Instead, they wait until the end of the very last scene to show us that Gaston’s jackass sidekick is dancing with a man. Deeming Le Fou, a loathsome toad, as the first homosexual in a Disney movie is not progress or at all flattering.

Condon has made a sparkling musical with fine moments but Watson’s ordinary performance, the feeling of déjà vu and some newly added missteps keep this from soaring.

'Beauty and the Beast' has no comments