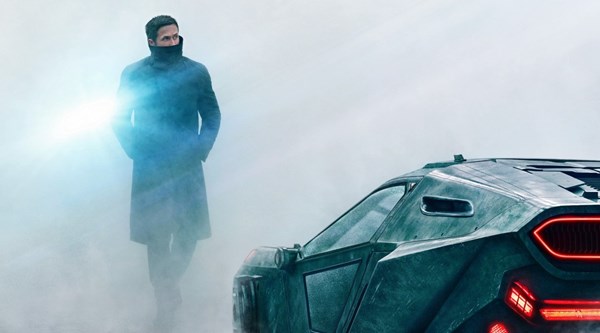 My college philosophy professor began his first class by asking his students how we knew we weren’t just heads floating in a jar. We all chimed in, “Of course we’re not heads in a jar! We’re alive, we have memories, all sorts of physical proof and, c’mon, that’s just stupid!” My professor calmly retorted, “Can you prove it? You have memories…so what? You can touch me and prove to yourself that I’m here but how do you know you’re really here? Are you dreaming this, or am I dreaming of you? If so, is this really your reality or is it mine?” The classroom of about thirty students became uncomfortably quiet. I just smiled. He got us.  That class was my introduction to existentialism and, since it came a few years before “The Matrix,” it opened my mind to how perception differs greatly from person to person.

I learned that Existentialism isn’t just about the fear of death but partaking in the joy and privilege of being alive. “Blade Runner 2049” knows this. Is it better than the original? I’m not sure but I prefer it over the first one.

The less you know about the plot, the better. Here’s the barest of summaries: Ryan Gosling stars as K, another L.A.-based Blade Runner tasked with assassinating a certain breed of renegade android (or “Replicant”). A recent homicide leads K to contemplate his own origins and track down the long missing Deckard (a returning Harrison Ford), who may hold the answers to everything.

A daring and polarizing choice director Denis Velleneuve makes is faithfully recreating the tone and feel of the original. Yes, the signature look of a futuristic L.A. is intact but this one is every bit as dark, slow, intensely violent and mood-driven as the prior film. It requires a patient, attentive audience member, which may be too much to ask for some.

Velleneuve makes a cinematic master’s thesis on “Blade Runner,” with a sequel that honors and one-ups the complex questions of identity and self-realization Scott’s film posed. This is a $150 million sci-fi art movie, not an action movie (though, when these moments occur, they’re fierce and stunning).

For “Blade Runner” die-hards, you couldn’t ask for a better sequel, as the mystery, beauty and depth is intact, as well as a Chandler-esque mystery and a deliberately slow pace. The details of the narrative are presented in a carefully knotted manner, not unlike the cinematic mind puzzles from Christopher Nolan. Villeneuve’s film works a trilogy with his “Enemy” and last year’s “Arrival,” which also explored the notion of self, parenthood and the need to be an active participant in one’s life.

While Roger Deakins’ jaw dropping cinematography offers worlds in various state of decay, but, as in the original, the character’s compassion, deep sense of longing and desires for love shines through the thick haze of despair.

Gosling’s portrayal of K’s contained inner struggle is harder than it looks to convey and Dave Bautistia is haunting in his one scene. Jared Leto is creepily hypnotic as a blind creator of Replicants. Although Ford enters the film belatedly, he’s excellent. Ford brings much needed humor to the film’s second act and conveys Deckard’s deep-seeded regret and eventual need for closure. For a film about a men having to face their pasts, it’s the women who steal the show. Robin Wright is sensational as K’s superior, Ana de Armas does wonders as K’s most unusual love interest and a chilling Sylvia Hoeks emerges the film’s most unforgettable figure.

Here’s another refreshing quality Villeneuve’s film shares with its predecessor: this sci-fi epic of ideas does not care in the slightest about whether its audience “gets” it or not. Unlike the majority of post-“Blade Runner”-inspired tributes and rip-offs made since 1982, Villeneuve’s film is thoroughly uncompromising. Villeneuve has made  a personal, meticulously crafted and fairly profound Chapter Two. It will polarize some but “Blade Runner 2049” towers over most 2017 movies. My philosophy professor would have loved it.