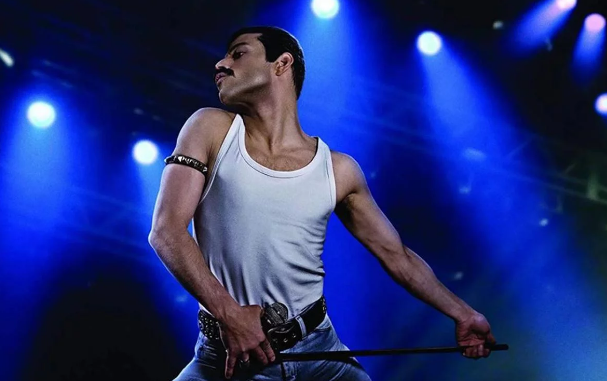 There is a powerful film trying to escape from within “Bohemian Rhapsody,” the Freddie Mercury rock biopic that plays it too safe.

We meet a young, odd Mercury, played by Rami Malek in a performance that will make him a household name. In 1970, while Mercury works at Heathrow Airport hauling luggage and seeming unlikely for greatness, he talks his way into lead vocalist position for a band. A few music montages later, he’s singing to a stadium, “I’m just a poor boy, nobody loves me…”

The best way to enjoy the film is to simply marvel at Malek’s transcendent work, soak up the great music and remind oneself that this is unlikely to be the only film made about Mercury. Nothing about “Bohemian Rhapsody” feels definitive, not even Mike Myers winking cameo as an record executive who rejects the operatic ambitions of the title tune.

Malek’s performance begins as a clever impersonation and builds into a full blown embodiment. By the film’s end, you believe you’re watching a real-deal Rock God and may even forget that Malek is lip synching up a storm. The supporting cast looks enough like Queen but, aside from giving them some emotional close-ups and looks of disapproval, the movie never gives Brian May, Roger Taylor and John Deacon a voice. The most interesting thing about the fellow band mates here is that Deacon is played by Joseph Mozello, who once played the terrified young grandson in “Jurassic Park.”

The dialog is flush with lines that editorialize Mercury’s life, sounding unlike actual chatter and a lot like movie lines. “Bohemian Rhapsody” is overly precious, surprisingly sheepish and relies heavily on rock movie clichés. Despite the behind the scenes struggle to get this made (particularly the fired original director, Bryan Singer, whose name is still on the film), it doesn’t feel like a troubled work. Instead, the culprit for the film’s shortcomings is the playing-it-way-too-safe screenplay, sticking to basic details that even VH1’s “Behind The Music” series fleshed out with greater detail.

There a few daring moments that take form but the film is always back peddling away from. At one point, we see Mercury, fittingly dressed like Al Pacino in “Cruising,” walking through a gay sex club…at least, I think that’s what it was. We see it so briefly, it may have just been a Village People-themed Halloween party. Mercury’s legendary, debauchery-wild parties are alluded to but we only see the untidy aftermath and never any drug use. People are depicted frequently asking Mercury, “Are you high?” My question- “From what?” We never see him have anything beyond a beer. I think we get a glimpse of cocaine but, knowing this movie, it was probably just a salt shaker someone knocked over. A movie’s rating doesn’t necessarily reflect its quality but the PG-13 rating seems to prohibit the scope of this story.

Mercury’s life was Sex, Drugs and Rock N’ Roll, and this movie only has just enough of the latter and none of the first two. Far more problematic is how his gay lifestyle and complicated relationship with his wife are soft-peddled. Then there’s the subject of AIDS, which is effectively introduced with Queen’s soaring “Who Wants to Live Forever” but, like everything else, quickly pushed to background. For a man whose life was so bold and daring, his movie is downright timid.

The legendary 1984 Live Aid concert is portrayed as Mercury’s last great stand. It wasn’t- the band had a final performance two years later. Nevertheless, this sequence puts the film over. It’s an epic-sized concert reenactment, with CGI normally reserved for a summer blockbuster, and it absolutely works. Yet, for all the film achieves in its mostly successful third act and the way it leaves audiences head banging as they leave the theater, something is missing. Singer, who previously directed “The Usual Suspects,” “Apt Pupil” and “Valkyrie” (to name just a few), has never made a tamer movie. When your subject matter is Freddie Mercury, that’s a problem.

'Bohemian Rhapsody' has no comments