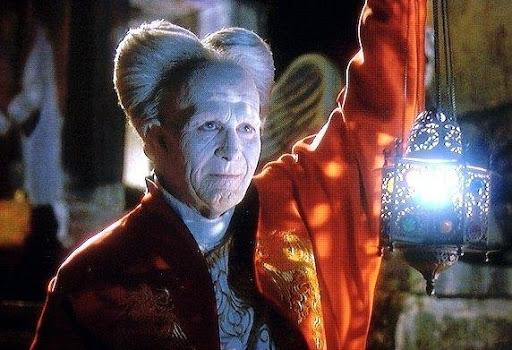 My father taught a class on Bram Stoker’s “Dracula,” and his notes, handouts and worksheets provided me with my initial education on the novel. So did the terrifying and gorgeous illustrations by Greg Hildebrandt, whose work for the 1985 The Unicorn Publishing House edition is forever etched into my imagination. On film, my first Dracula was Frank Langella, who played the ageless vampire count as a suave, collected and tightly coiled snake. In the same movie, Dracula’s adversary, Dr. Van Helsing, was embodied by Sir Laurence OIivier. Seeing those two actors play these literary horror icons made a vivid impression. Whereas Bela Lugosi, perhaps the definitive screen Dracula, and Boris Karloff, as Frankenstein, gave performances in line with early, highly theatrical film acting, Langella and Olivier treated their roles as though it were Shakespeare. Fittingly, decades later, Francis Ford Coppola’s take on Stoker’s novel resembled the most bombastic, button popping opera imaginable.

Gary Oldman plays Stoker’s ageless Count Dracula, whose existence is marked by loneliness and casual murder. In 1897, Dracula allows Jonathan Harker, a young real estate agent (played by Keanu Reeves) to stay at his castle in Transylvania. Dracula discovers that Harker’s fiancee, Mina (played by Winona Ryder) holds the key to both Count’s past and future. This leads to Harker becoming the Count’s prisoner, while Dracula alters his appearance and relocates to London, in hopes of seducing the former love of his life.

Coppola’s film is a blood-soaked, sensual knockout, utilizing cinema and classical theatricality to evoke a world undergoing transformation. The character of Dracula represents the change of the times, as new diseases, new inventions, new sexual attitudes, new moral standards and new ideals are coming to change the world. The central characters (namely Dracula and Van Helsing) are either uninhibited or find the courage to no longer hide in the shadows. Among the themes swirling beneath the gothic veneer is convention vs. societal expectation, giving in to newfound desires vs. remaining on a conventional path. The arrival of Dracula allows the individuals around him (who vary in terms of reputation, mental stability and social acceptability) to openly unleash their inner id.

Every scene of Coppola’s film is full of rapturous touches and the suggestion of sexual empowerment as an enticing temptation with potentially grave consequences. The moralistic themes, which tap into Stoker’s writing and Coppola’s infusion of Catholicism, are front and center from the very beginning. We see Dracula renouncing of God, which is visualized by a cross and other religious icons bleeding profusely. This shocking, assaultive start will be too much for some, who may want to duck out before the opening title blazes the screen. For those willing to tag along with Coppola at his most what-me-worry flamboyant, the dream-like imagery never ceases. For lovers of cinema at its most pure and demonstrative, there are visual rewards awaiting in every scene.

By the time we get to Dracula’s castle, I was delighted to see that this was the “Dracula” I know, as Stoker’s approach of conveying the tale through journal writings and Coppola’s visualizing gothic horror (often as richly as Hildebrandt) makes it a faithful companion to the novel.

Likewise, the performances display no inhibitions or reservations with the material. Oldman is brilliant as the elderly count. His thick Hungarian accent is both a Lugosi homage and way of conveying how a very-old vampire pushes through his language to duplicate another. Oldman is also surprisingly sympathetic and charismatic as the young, romantic incarnation and terrifying as the bat creature. Hopkins cuts loose from the coiled madness of Dr. Lecter and takes the breaks off. Sure, he’s playing to the cheap seats but Van Helsing has rarely been this forceful and funny. Ryder is excellent, as is a spectacularly bonkers Tom Waits as Renfield, and the delicious Sadie Frost as the doomed Lucy.

Reeves is as bad as you remember but he’s such good fun to watch and listen to, he doesn’t ruin the movie. His performance winds up being the campiest touch here and its fascinating to watch Reeves stumble through scenes opposite Oldman and Hopkins.

“Bram Stoker’s Dracula” looks like a Merchant Ivory nightmare and, despite its unlikely opening around Thanksgiving of 1992, it played like a summer blockbuster. While there were no action figures or Happy Meal tie-ins, the movie was aggressively marketed. I still have my “Bram Stoker’s Dracula” soundtrack, making of booklet, video game, Topps trading cards and comic books.

At one point, its opening weekend gross was the highest in the history of its studio, Columbia Pictures. It’s no wonder the film was a box office smash. Whether you love the film and forgive its onslaught of visual excess or hate it for the same reason, its loaded with unforgettable imagery. Opening around the same month as “Home Alone 2,” “Malcolm X” and “The Bodyguard,” there was nothing else in theaters remotely like Coppola’s film at the time. After “Bram Stoker’s Dracula,” there was a resurgence of big budget gothic horror films, as well as big name actors willing to appear in them.

Coppola’s fans may have initially been skeptical at his taking on a seemingly commercial studio horror film. Yet, his ongoing themes of familial guilt (“The Godfather”), the loss of identity and moral compass (“Apocalypse Now” and “The Godfather Part II”), time travel as a means of connecting with true love (“Peggy Sue Got Married”), and female empowerment in an age of repression (“The Rain People”) are intact. The final scene is open to interpretation. Will God forgive Dracula and allow him to reunite with his doomed bride in the afterlife or does his existence cease after crossing “oceans of time” to be with Mina? I’m not sure but that final shot is strangely moving, especially considering what just happened before it.

Among the extraordinary visual touches (to cite just a few): the peacock feather that fades into the train tunnel, the gory death(s) of Lucy, and Dracula backing into a shadowy corner and transforming into a pile of rats. The layered imagery, barrage of operatic visions and go-for-broke performances make it an essential vampire film. Its bigger and louder than Stoker’s novel but maintains its haunting power and results in one of Coppola’s best expressions of his love for film.