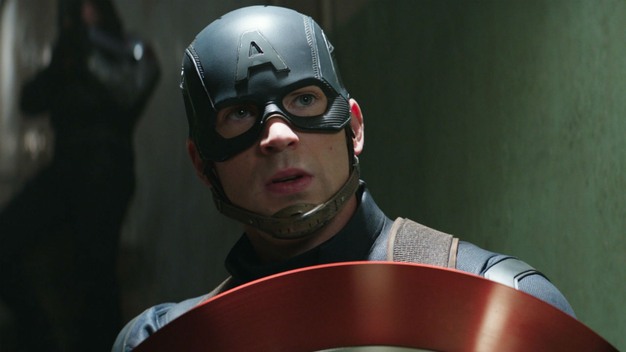 Comic book fans looking for some real comic-book-type-action translated onto the big screen will be laughing giddily like I was when Cap’s team takes on Iron Man’s in what’s likely to become a classic cinematic fight scene for all time. Each scene of the airport battle is ripped from the pages of a comic book.

I caught myself at least twice giggling like a little school boy who just got his Drumstick from the ice cream truck on a humid summer day, removed the paper wrapping to reveal the vanilla creaminess snuggled in a sweet sugar cone and protected by a hard chocolate shell spiked with crunchy peanuts. Sound like a lot of details? Yes, just like the airport battle scene that I just can’t wait to see again. The comic-book-style-action displayed in this battle is done to absolute perfection. Cap vs. Iron Man. Falcon vs. War Machine. Scarlet Witch vs. Vision. Cap vs. Spidey. There is just too much comic book magic to be seen.

Wait, Spidey is that you? Oh yeah, didn’t you hear that your friendly neighborhood Spider-Man has now joined the Marvel Cinematic Universe? Sorry Tobey Maguire and Andrew Garfield, Tom Holland just blew you guys away. He’s the Spidey that real fans have been dying to see. And don’t forget how hot they made Aunt May by casting Marisa Tomei for the role. I now feel my own biological clock ticking like this. Thump. Thump. Thump.

But “Captain America: Civil War” is more than just one awesome battle sequence. It’s a complete film that captures you start to finish and creates some very real motives for all involved. Remember when Superman fought Batman just a few months ago? While I liked that film more than most, I wasn’t really convinced of either of their motivations so it was simply a cool fight with very little meaning. But when Cap takes on Iron Man, it’s for real. Both characters have strong and more importantly, believable reasons to turn on each other so the fight actually means something not only to them, but the audience as well.

This the second Cap film directed by the Russo brothers and I can only imagine how difficult it was to have so many characters involved in the plot and to make them all matter. Not only do you see most of the Avengers, but the Black Panther is introduced and Ant Man makes a very memorable appearance as well. His part in the big melee will definitely elicit the most audible reactions. But the Russos pull off the challenge effectively and continue to prove that they are one of the best around when it comes to marrying story with action.

Now while I gush on and on about the film, it’s certainly not perfect: some of the action scenes suffer from major shaky cam; the mastermind villain is more of a plot device than a real character; and I still think that Black Widow is totally useless when fighting with the big boys and sure enough, she’s kind of kicked to the curb when it comes to the big fights.

But still, “Captain America: Civil War” is a definite crowd pleaser and one of the best films to come out of the Marvel Comic Universe (MCU). In fact, let’s rank all twelve films of the MCU so far:

7) The Avengers – Not in love with this film as most others but still, so cool to see them all fight together

6) Avengers: Age of Ultron – Yes, I’m one of the few that actually thought it improved on the original

5) Iron Man – The one that started it all

3) Captain America: Civil War – To make the Top 3 of this list is pretty damn impressive

2) Guardians of the Galaxy – Who would’ve thought a story about alien heroes could be so much fun?

1) Captain America: The Winter Soldier – A near perfect film. So many things right in this one.