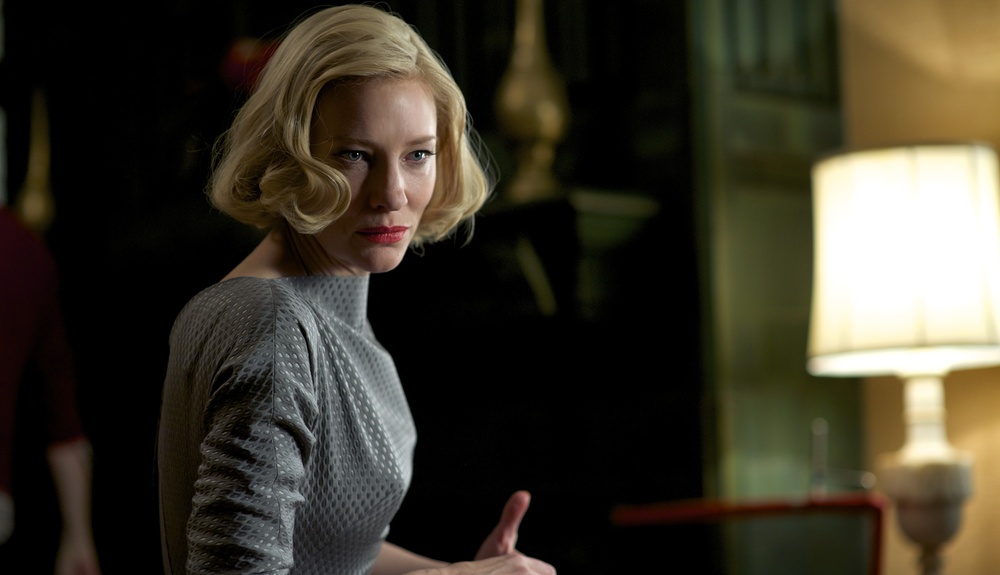 The opening image of “Carol” is a close up of a street grate. As the camera pulls back, we take in the rich, longstanding patterns that make up this small but integral part of the landscape and the film begins from there to establish a world that is now alien to most: America in the 1950’s. Like the street grid, the patterns of this world are firmly established and in place, with Americans partaking in shopping, marriage and their careers in a manner that could be described as ritualistic and mechanical. Watching the inner working of a 1950’s era department store is, indeed, as oddly fascinating as seeing someone commandeer a space shuttle.

When we meet Therese, played by Rooney Mara, she’s a friendly but meek young woman, working in a department store. Therese is wearing a silly hat and seems shy and unassuming. When Carol walks into her section and exudes movie star glamour, we get it immediately: Carol is radiant, exudes wealth and control, gloriously standing out from the other shoppers. From that moment on, it’s clear that the single, shy Therese is puddy in the hands of the married, captivating Carol.

“Carol” is based on a story by Patricia Highsmith, the author of the thematically similar “Strangers on a Train” and “The Talented Mr. Ripley.” While “Carol” isn’t a thriller, it shares the intensity, period and idea of concealed identity. The central characters in those films were either gay or struggled to understand their inner longing, whereas in “Carol,” Therese gradually begins to understand that her attraction to Carol is sexual, though the relationship has an obsessive, controlling quality that only Carol seems aware of.

The sex scene comes late in the film and it’s a surprise, both in terms of its inclusion and how explicit it is. “Carol” is designed to resemble the classy, old fashioned films that were playing in the 1950’s, with the bedroom scene between Mara and Blanchett the core reason (aside from some profanity) that this received an R-rating. I mention the scene not as a warning but to admit it took me off guard, as the eroticism on hand is otherwise more cerebral than physically conveyed.

“Carol” is an instant classic, a film so full in its vision and ideas, it feels from start to finish like a work that will last. Through use of color, costumes, sets and well selected performers, Haynes recreates the 1950’s in a way that feels less like a facsimile and more akin to time travel. His vision of 50’s America is so precise and richly observed, it provides a window into what we once were, as well as subtext on how those alive at the time viewed the taboos at hand. It’s worth noting that Haynes’ first, best and still unreleased “Superstar: The Karen Carpenter Story” (in which music star Carpenter’s life was told through Barbie dolls) was also about breaking through societal/imposed  expectations.

Blanchett finds the layers to convey how Carol is both adventurous but calculated in her choices, while Mara is thoroughly touching and open. Sarah Paulson and Kyle Chandler stand out in supporting roles that illuminate the societal attitudes towards Carol and Therese’ relationship, but it’s the two leads who you won’t be able to take your eyes off of.

The story is always involving, though the film is sometimes emotionally chilly. This is perhaps due to Carol’s practical, grounded approach to her feelings is stronger than Therese’s more demonstrative manner of behaving.

Haynes finds the heart of his film in the wraparound scene: the close-up of a hand on a shoulder, appearing early as a suspicious moment. Later, seen from a different angle and with further understanding, the image leaves a bruise.

'Carol' has no comments