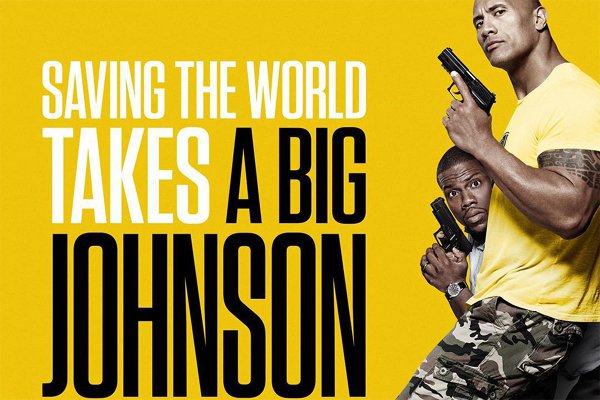 Aw, The Rock is so…cute?

“Cute” probably isn’t the first word that comes to mind when thinking of Dwayne “The Rock” Johnson, but that’s exactly what he is in “Central Intelligence.” The hulking action star always displayed a knack for comedy and exudes a natural charm in all of his roles, but this film gives him the opportunity to be a total goofball. He wears unicorn t-shirts and jorts while expressing his joy through adolescent vernacular, using words like as “cool” and “dope.”

And it’s that kind of playing against type that really makes “Central Intelligence” work. Johnson plays Bob Stone, a CIA agent who was fat and bullied in high school and had no friends. He did, however, look up to Calvin Joyner (Kevin Hart), the Big Man on Campus. After twenty years, Calvin has settled for the ho-hum suburban life as an accountant, until he suddenly receives a Facebook friend request from The Rock and that’s when the shenanigans start. Stone is under suspicion of stealing classified government data and Joyner is forced to work with him to find the real culprit, not knowing for sure if Stone is indeed guilty himself.

Speaking of playing against type, Hart does exceptionally well as the straight man. The film’s plot sounds a lot like it could be “Ride Along 3” but Hart tones down his antics just enough to let Johnson steal the show and it’s a smart play – the resulting chemistry between the two is very strong, creating a powerful comedic force.

“Central Intelligence” is an action-comedy that’s light on the action but the comedy really works. The film also delivers messages about bullying and friendship that add depth to the story beyond the crazy hijinks. I loved seeing these two stars on screen together and they definitely left me hungry for more. Because they were just so cute!

'Central Intelligence' has no comments