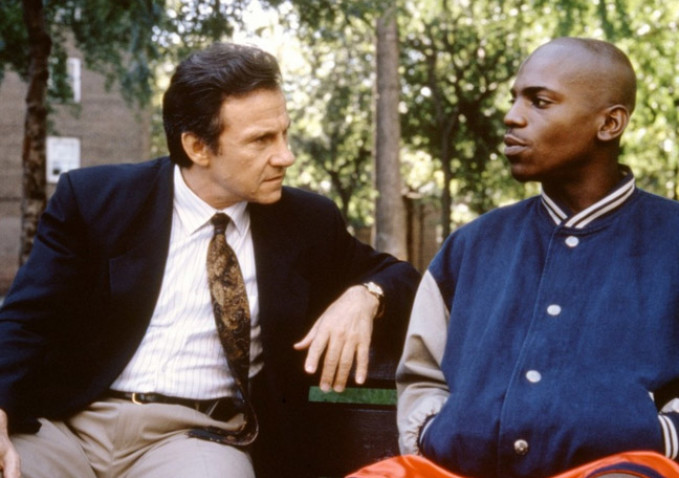 For reasons that have never been made clear to me, Martin Scorsese decided not to make “Clockers.” The film was set up at Universal Studios, Scorsese picked Robert De Niro to play Rocco, the lead, and Richard Price (who wrote the riveting screenplay for Scorsese’s “The Color of Money”) wrote the adaptation from his bestselling novel. At some point early on, Scorsese decided to make “Casino” instead and took De Niro with him, only working on “Clockers” as an executive producer. Spike Lee, who was inspired by Scorsese when he spoke to him during his film student days, took over as the director. I know this from Lee’s terrific “That’s My Story and I’m Stickng To It,” as well as reports that surfaced around the time of the film’s production. Yet, I’ve never found a clear reason why Scorsese decided to pass on Price’s rich material and move on to make the familiar but massively complicated production of “Casino.” No matter, Lee was the perfect choice for this, one of his best movies and possibly the most under-looked film of 1995.

Mekhi Pfeiffer (in an impressive film debut) plays Strike, a “clocker” (a 24/7, around the clock drug dealer) who oversees a portion of his neighborhood and looks after a new crew of clockers. Strike’s mentor, Rodney (played by Delroy Lindo), runs a barbershop and acts as  a neighborhood role model but isn’t hiding his truly evil hold on the young people, to which he provides “guidance.” His drug running business is under watch of Rocco (Harvey Keitel, filling in for De Niro) and members of the neighborhood who verbally object to horrible misdirection young men and women are making, in either selling or buying drugs. When a local businessman is shot, Rocco eyes Strike and uses the investigation as a means of tearing down Rodney’s grip on the community.

Lee has been accused of making films that delve into racism with too heavy a hand, a point I won’t address in full but disagree with. Rather than address each of his films, I’ll note that “Clockers” is one of his angriest and doesn’t go easy on any of the characters, regardless of race. Rocco is no more the “good guy” than Strike and we see how casual racism, cynical indifference and absence of empathy plague the white cops as much as the black youths they pursue. A key line, in which Strike asks, “who the f— is Rosa Parks,” sums up the problem Price and Lee are focusing on: when a generation is ignorant of the struggles of the one before it and simply recycles the mistakes, enforces stereotypes and allows a lack of empathy into their lives, there’s no hope for the future. That sounds heavy and “Clockers” can be awfully grim, but that isn’t to say it’s not entertaining, occasionally funny and always gripping.

While Lee was making “Jungle Fever” in 1991, a slew of African-American filmmakers came on the film scene, marking their exceptional debut films with depictions of life in “the hood.” Works ranging from “Boyz N The Hood,” “Straight Out of Brooklyn,” and “New Jack City”  came out during this renaissance of black filmmakers. Lee went on to make “Malcolm X,” his finest movie, and all but ignored the “gangsta” movies that stacked up. That is, until “Clockers,” his passionate response to the genre.

The opening credits, in which the beautiful “People in Search of a Life” plays over a montage of horrific, real-life crime photos, sets an unforgiving, immediate tone. Lee’s harsh, no-nonsense response to all the “hood movies” doesn’t celebrate or glamorize gang culture in any way. The emphasis, right from the start, is on lives lost, families torn and the potential in the youth of America cut short by addiction and gangsterism. It’s no wonder “Clockers” flopped in theaters- unlike “New Jack City” or even the rousing comeuppance at the end of “Boyz,” none of this looks fun. Lee has an obvious contempt for the “gangsta” mentality that is unusual for these movies (most post-“Scarface” movies are truly advocates for that lifestyle) and a welcome caution against it.

Strike isn’t a role model; he’s in-over-his-head and child-like, down to the train set he maintains and his steady diet of chocolate milk (which he regularly ingests to sooth his mounting ulcer). Rodney is another piece of work, an urban “Artful Dodger” who wants everyone to see him as a father figure and a respectable mentor. Rodney is truly evil, a quality made complex and vivid by Lindo’s extraordinary performance (which is especially stunning if you remember how moving he was playing the musician father in Lee’s excellent “Crooklyn” the year before). Establishing the theme of generational abuse and giving a performance arguably more frightening than Lindo is Tom Byrd, playing Erroll Barnes, the man who taught Rodney everything he knows. Byrd makes Barnes a terrifying street monster, if all the horror and ugliness of the street were absorbed into one man. A rich contrast is Keith David as Andre, a cop who tries to sway the neighborhood kids away from drugs and seems to be losing. He keeps a stern eye on Strike, who he tries to set straight but recognizes is a lost cause. David is terrific as the moral center of the story, a man who struggles to establish order in a community where corruption is acknowledged and embraced in an unbreakable cycle.

The whodunit that puts the second act in motion (Who Killed Darrell Adams and is it the man they arrested?) is riveting. Price has created a great narrative and his whodunit is an involving mystery. While Lee’s usual cinematographer at this point, Ernest Dickerson, went on to directing his own movies, Lee was fortunate to hire Malik Hassan Sayeed, who makes “Clockers” one of Lee’s most visually astounding films. The cinematography both washes out and heightens the color palette, which either scorches the screen or de-saturates it. The camera’s eye conveys the heat, tension and discomfort the characters are feeling.

Keitel may be the top-billed star but he’s surrounded by a great ensemble cast. Isaiah Washington, playing Strike’s responsible brother, provides a working class ethic that intriguingly contrasts with Strike’s me-first mentality. Lee himself has a small role as a bystander, putting him in the same space as his audience: dumbfounded, mesmerized witnesses to a crime.  Lindo’s work was Oscar-worthy, particularly his chilling monologue on how crack cocaine reveals one’s true self. Equally unsettling are moments where it appears Sayeed captured actual, pregnant crack fiends approaching the actors playing the drug dealers.

Lee has dealt with the topic of drugs plaguing cities, particularly in the haunting last act of his “Jungle Fever.” Here, rather than portray drug users and the climate as a Dante-esque legion of evil, he and Sayeed get in close to the faces of the culprits. Few filmmakers can blend furious personal/political/social commentary with playfully stylish, extremely entertaining filmmaking better than Lee.

The last thing I’ll mention is the film’s climax, which is the best stand-alone set piece Lee has ever directed. It’s a two-part sequence, in which a young boy commits a horrible crime in broad day light, and the aftermath of Rocco coaching the boy how to make a police statement. This scene reflects the angle of the Virtual Reality game the boy is playing, a spot-on, ahead of it’s time shoot ’em up called “Gangstas,” years ahead of “Grand Theft Auto.” I don’t know if Lee is going after irresponsibly violent video games but the suggestion that he’s miffed with gangbanger video games makes the subtext even more delicious. Without explicitly describing the scene, it portrays duel perspectives that merge into one. Lee’s visual trademark, of a character seemingly floating towards the camera, has never been used to such extraordinary effect. “Clockers” was one of the best films of 1995 but this late-in-the-movie sequence is so brilliant and hypnotic, it stands apart as an example of why Lee is such an important filmmaker.

This could have been a TV-ready police procedural. Instead, Lee faithfully recreates Price’s novel (though the focus is now, wisely, more on Strike than on Rocco) and demonstrates some of his most inventive, eye-catching filmmaking yet. “Do the Right Thing” is widely considered his masterpiece but it’s not. He didn’t peak that early. Looking at “25th Hour,” “Get on the Bus,” “Bamboozled,” and especially “Clockers,” we see an artist with as much passion as talent in his cinematic arsenal.

'Clockers' has no comments