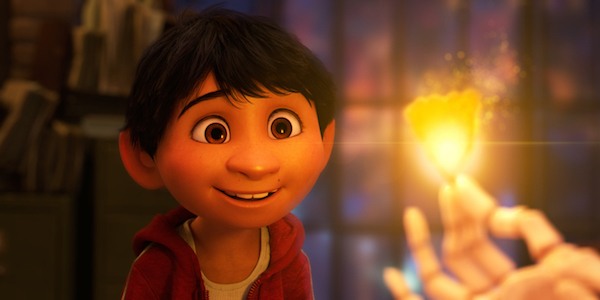 The title character of “Coco,” the new Disney/Pixar CGI masterpiece, is the great-grandmother of Miguel, a young boy and the main protagonist. Initially, it seems odd that the movie would be named after Miguel’s oldest living relative, who is depicted mostly sitting, barely moving and only somewhat aware of what’s going on around her. As the film progresses, we learn how profound the bond between Miguel and Coco is, which is what makes this unexpected triumph so endearing.

The Mexico-set tale centers on Miguel (voiced by 12-year old Anthony Gonzalez) being  raised by parents who forbid him to play music. An involving back story provides hints as to why Miguel’a desire to be a great guitarist, like the late, great Ernesto de la Cruz (voiced by a fantastic Benjamin Bratt), is blocked by his overly attentive guardians. As emotions reach a boiling point in Miguel’s home, he flees with Ernesto’s guitar and finds himself in the Land of the Dead, a spirit domain that exists on the other side of our known world while the Day of the Dead holiday takes place. Miguel seeks out Ernesto and befriends Hector (voiced by an excellent Gael Garcia Bernal), whose union with Miguel reveals multiple surprises.

A glimpse at the trailer led me to believe that Pixar was making an animated feature awfully similar to the gone and forgotten 2014 “The Book of Life,” which also took place in a Day of the Dead-inspired spirit world with talking skeleton characters. While “Coco” has a structure out of “The Wizard of Oz,” the formula from last year’s triumphant “Moana” is also firmly intact: the young lead wants to think outside the box and go against family tradition but is held back by a strong willed authority (here, Miguel’s Abuelita is a stand-in for Moana’s father). On the other hand, a different family member (I won’t reveal who but the equivalent of Moana’s dotty grandmother) encourages Miguel to seek the truth and pursue his dreams. The most important comparison “Coco” shares with “Moana” is how it aims and largely succeeds at celebrating the culture it depicts, avoids stereotypes and weaves mysticism and folklore into an engrossing tale of personal discovery.

The greatest strength of “Coco”  is its depiction of how music connects us to our past and those gone but never forgotten. For all the rainbow-colored beauty on display and richly designed characters and settings on display, it’s the emotional climax of the film, between Miguel and Coco, that will likely seal the film’s legacy; this remarkable, quiet but emotionally charged sequence is among the most touching in Pixar’s history. I can’t remember the last time I heard a sold out movie house of audiences openly weeping. The scene is so good, it was likely the idea that the story was built around.

The three lead performances are excellent and bring so much heart and layers to their characters. This is one of the few rare, big budget studio films with a mostly Latino cast, including Edward James Olmos and Cheech Marin (though the end credits informed me that Pixar staple John Ratzenberger is also in there somewhere).

Sometimes the story drags its feet getting from one major incident to another. “Coco” also could have used a little more humor and a lot more songs. Considering how marvelous the original tunes are, this should have been a full-on musical. Still, as I left the theater rubbing away tears and thoroughly choked up, the things about the film I didn’t like seem fairly minor. Despite the Day of the Dead setting and the skeletal appearance of many characters, there’s a lot of heart and warmth in this one.

“Coco” is preceded by “Olaf’s Frozen Adventure,” a touching, highly calculated and (at 21-minutes) surprisingly long animated musical feature. If nothing else, it’s a sobering reminder to parents that, no matter how sick you are of “Frozen” right now, be warned: “Frozen 2” is on its way, ready to take over the world and bludgeon us with more show tunes that we’ll be listening to for the next ten years.

'Coco' has no comments