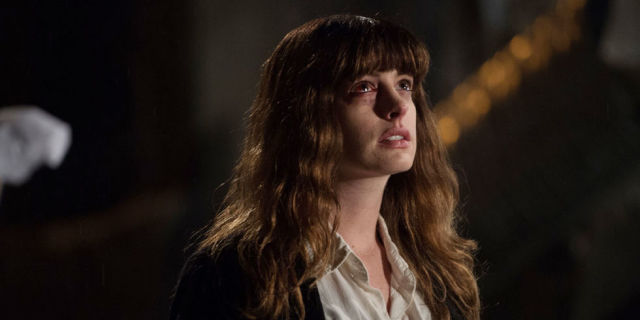 Nacho Vigalondo’s “Colossal” sports a unique premise, one of the most original in a long time. Anne Hathaway stars as Gloria, a New York writer whose relationship with Tim, her boyfriend (played Dan Stevens), goes south after too many drinking binges. Following many nights of Gloria becoming blackout drunk and forgetting details about her day, Tim kicks her out. Gloria returns to the small town she grew up in, reconnects with Oscar, an old friend (played by Jason Sudeikus) who hires her to work at his bar.

Aside from the peculiar prolog, the set-up is very rom-com familiar. If there’s any chance you haven’t seen the spoiler-crazy trailer for “Colossal” and don’t want to know what happens in the second act, stop reading this now and come back after you’ve seen the film.

Without revealing too much (as the marketing materials for “Colossal” certainly have), Gloria awakens after another bout of drunkenness to discover a shocking incident has occurred in Seoul: a giant monster, the size of a building, has materialized and is stomping around like Godzilla. Gloria quickly realizes that her state of mind has something to do with the timing and motivations of the mysterious creature.

One of the most enjoyable things about “Colossal” is that it goes in a very strange, unfamiliar direction and thrives on its unpredictability. Writer/director Vigalondo also helmed the well-liked “Time Crimes” and a number of inventive short films. His latest work not only carries a one-of-a-kind story but demonstrates how far a low indie production can stretch its budget.

Hathaway is very good, though both she and the screenplay seem to hold back from fully exploring the self destructive qualities of Gloria. Far better is Sudeikis, in a surprisingly excellent performance.

Presumably, Hathaway and Sudeikis weren’t paid their usual fees (likewise Steven or Tim Blake Nelson) and the money available was spread around to ensure the visual qualities, both the filmmaking and CGI effects, were stellar. For the most part, the monster design and scenes of large scale havoc in Seoul are done so well, they would hold up in a much bigger summer movie enterprise.

Not counting the extras during the Seoul monster attack scenes, there are only five main characters. With some very inventive staging, this could easily have worked as a stage play. Despite the novelty of seeing a monster movie invading a romantic drama (imagine “Hope Floats” getting high-jacked by “Pacific Rim”), much of this is set in Gloria’s house,  Oscar’s bar or a playground that plays a crucial part of the tale.

It’s a compact way to structure a film but also underlines what a little project this is. While it’s easy to admire how much mileage Vigalondo gets out of his film, “Colossal” doesn’t go far enough as either a comedy, sci-fi fantasy or an allegory about overcoming addiction.

The explanation for the creature phenomena is unnecessary and unsatisfying. More crucially, this is the softest film in memory about a woman striving to overcome her drinking problem. Granted, much of this plays like a droll comedy but the film would have benefitted greatly by being much darker and dropping the humor altogether.

Although Gloria, Oscar and the two barhop buddies discover what’s taking place in Seoul, they mostly stay put and gab. Much of this plays like a lesser “Nobody’s Fool,” another conversation/character-driven comedy set in a small town in upstate New York.

Although “Colossal” isn’t a total success, it does finally connect in the last stretch. A tense bit where Gloria and Oscar have an exchange just using their eyes is a funny visual and the dynamic of their character’s relationships develops in a surprising way, setting up the actual theme at the film’s core. Rather than provide a cautionary note for those with dealing with substance abuse, this is about not allowing yourself to be controlled, either by drugs or the people in your life.

A remarkably nutty climax redeems the stretches that don’t work, as Vigalondo concludes the whole thing with imagery both impressive and positively bonkers. Taking any of this literally (or pondering if Vigalondo is making any socio-political commentary about the US relationship with Seoul) doesn’t help. There is a distinctly dream-like quality to this, particularly the amusing encounters that take place on a playground. Perhaps the low key approach to making a monster movie really is the key to the whole thing- despite all the talk about growing up, being responsible and ceasing to give in to inebriation, our protagonists work out their problems stomping around a playground sand pit, like the big kids they truly are.

Three Stars (out of five)

'Colossal' has no comments