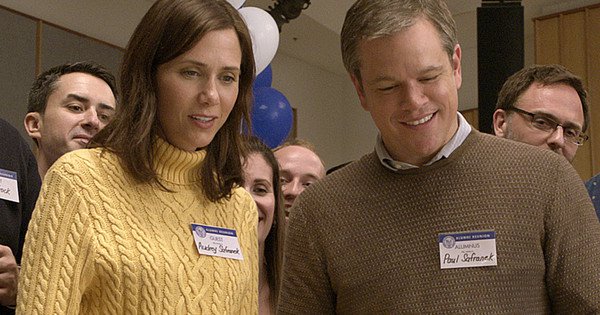 Every great director has the occasional creative set-back and helms a project that falls short of its potential. Some of our best dialog/character-driven filmmakers, who have a gift with casual onscreen conversations, stumble once in a while. To cite a few examples, the late, great Mike Nichols had “What Planet Are You From?,” Jason Reitman had “Labor Day” and now Alexander Payne’s “Downsizing” stands as a rare failure for the otherwise stellar filmmaker.

Matt Damon stars as a soft-hearted everyman who is lured into Downsizing, a scientific process in which humans are miniaturized and live in Leisureland, the equivalent of luxurious dollhouses. Those who are downsized live with an increased  income (“Your $52,000.00 translates to $12.5 million to live on, for life“) and leave little carbon footprint. The catch is that it’s an irreversible process. We follow Damon’s character, who is willing to become a pinky finger-sized human, alongside with his wife (played by Kristen Wiig), in a world where rosebuds are the size of a car.

“Downsizing” begins as a droll, intriguing sci-fi tale and amusingly establishes the process and social attitudes towards those who “go small.” What’s disappointing is that, once everything is set up and Payne starts to dig into the premise, his film doesn’t seem to know where to go or what it wants to be. To be blunt, it just doesn’t work.

Payne’s recent “The Descendents” has been accused over the years of being overly focused on Caucasian protagonists in its Oahu setting, not including enough of Hawaii’s “mixed plate” culture or fully representing what modern day life in Hawaii is like. That accusation strikes me as unfair in some ways, as George Clooney’s lead character is faced with how his crucial financial decision will affect not only the future of his family but the ecological and social welfare of those living on Oahu.

On the other hand, “Downsizing”  feels like it was written by a man grappling with those outside his comfort zone and being unsure of how to proceed. Like James L. Brooks’ “Spanglish,” this is another off-movie from a writer/director who is normally in full control of his tone, character building and unpredictable story structures. Its more awkward than illuminating. Speaking of awkward, the lamest scene by far is a stage presentation on the logistics of “going small,”  performed by Neil Patrick Harris and Laura Dern. You know you’re in trouble when those two can’t bring much juice to a premise this ripe with potential.

It helps that Christoph Waltz is playing the film’s most cynical character (and that he’s paired with the always-game Udo Kier, in a wonderful turn). Other assets are how good the score is by Rolfe Kent and  that Damon is a far better Everyman here than he was in “Suburbicon.” However, the humor and laughs overall are mild. The potential of the premise and (unlike “Innerspace”) the possible dangers facing those “living small” are never explored enough or even brought up. Wouldn’t those opposed to the “downsized” blackmail the economically flush denizens of Leisureland from being stepped on? What happens if centipedes, cockroaches or a common house fly were to infiltrate the hermetically sealed world of Leisureland?

Hong Chau’s Vietnamese character, who speaks in broken English, comes off as a hurtful caricature who becomes more absurd as the story progresses. Chau’s performance has been celebrated by some and, to be sure, she gives the role a committed gusto but, the more you think about it, her character is a rotten fantasy. “Downsizing” fatally meanders to its clunky, is-that-all-there-is finish. As an allegory for being more present and aware of financial barriers, it’s not as thoughtful as it clearly thinks it is. It’s truly odd and not in a good way.

'Downsizing' has no comments