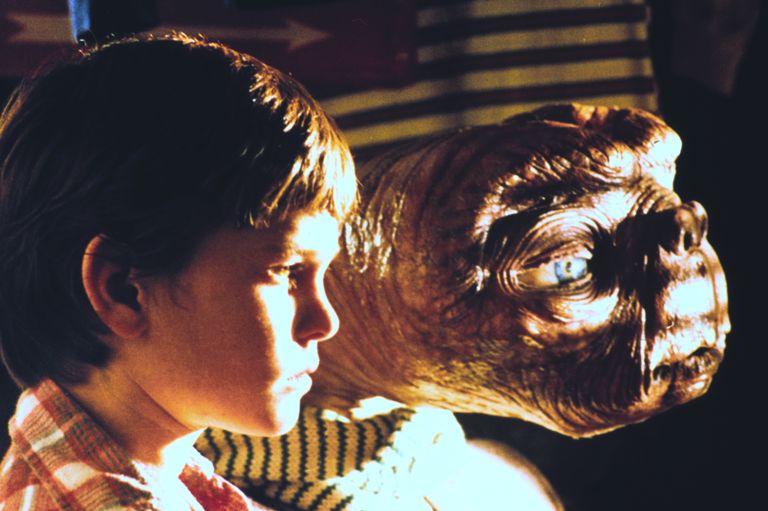 We open on an alien space craft landing in a forest, as small extra terrestrials work mysteriously, taking samples and exploring the woods. A car pulls up, faceless men chase an alien away from his companions and the ship takes off. A small alien creature, who purrs like a kitten, shrieks like a boar and has remarkably expressive eyes, is lost and alone on planet Earth.

Following the poetic, dialog-free beginning, in which Spielberg demonstrates his mastery of cinematic storytelling, we meet the film’s protagonist, Elliot, played by Henry Thomas. His mother, Mary (played by Dee Wallace) is single and is repeatedly hurt by the declaration that “Dad is in Mexico with Sally.” Elliot has a good relationship with his older brother, Michael (played by Robert MacNaughton), and younger sister, Gertie (played by Drew Barrymore), but comes across as an outsider and doesn’t have many friends. Immediately, Elliot strikes up a bond with the stranded alien, who he names “E.T.” and forms an odd, unexplained psychic bond with it

Spielberg’s film contains some of the greatest child performances ever captured on film. Thomas and Barrymore give remarkably expressive, natural and heartbreaking performances. Thomas evokes such feeling and chemistry with E.T., it’s easy to forget the title character is really Carlo Rambaldi’s still-amazing puppet. The sad monolog Thomas gives as Elliot mourns his fallen friend is deeply moving. Watch Barrymore during the scene involving a defibrillator- her reaction is crushing and utterly convincing. No less excellent is MacNaughton, who never hits a false note as the older brother who gradually comes around. There’s nothing polished or sitcom-mannered about the work from Thomas, MacNaughton and Barrymore, who never appear to be acting. The only kids in the film who give hammy turns are the bike gang, led by a young C. Thomas Howell. At least Howell and his cohorts are convincing as a (very 80’s) BMX posse.

The tension builds quietly and underscores the magical moments throughout the first and second act. Spielberg’s “little” ten million dollar film, both exciting and devastating, is timeless, even with the 1980’s setting. It leaves a powerful impact and demonstrates how completely Spielberg’s understands the language of cinema. Allen Daviau’s cinematography, with lighting that gives this the look of illustrations from a child’s book, is beautifully dreamy. While it proved a problem in some of his later films, the “Spielbergian Glow” is an asset here. John William’s gorgeous score is every bit an essential ingredient as Rambaldi’s amazing puppet. Presenting the adults as cold, faceless and casually cruel (save for Peter Coyote’s Keyes and Wallace’s Mary) contrasts the open-minded, innocent journey of the children. During the frog scene, notice how the faceless science teacher declares, “notice the heart is still beating,” a comment that applies later on in a much harder way. Elliot saves the frogs in his science class and then E.T. and then himself. Elliot’s journey is of a child learning empathy.

Elliot’s mother Mary isn’t foolish. Stone captures the fragile, lonely state of mind her lovely character struggles to bat away each day. I’m intrigued by how Barrymore’s Gertie refers to Wallace’s Mary by her first name. Is Gertie Mary’s stepdaughter, a little girl she affectionately raises who was left behind by Dad? This possible touch makes Mary all the more endearing.

Note the name Mary and the possible religious allegories, which aren’t heavy handed but still visible. This could be viewed as the story of Jesus as filtered through sci-fi, though it’s possible to not see that connection at all (Spielberg has denied he designed “E.T.” that way).

The only moment that doesn’t really work is Spielberg’s quick, silly tribute to “The Quiet Man.” At least this was obviously made by the best kind of filmmaker- the type who really loves movies. Sci-fi rarely feels this authentic (both emotionally and in its vague depiction of alien logic) and unforced. Yes, its awe inspiring to see that bicycle fly across the moon but the sight of Elliot showing E.T. around his bedroom is no less moving and seemingly “real.”

The sad third act feels like the gut punch of the painful “Bambi” reveal, which I’m certain was intentional on Spielberg’s part. These scenes, in which scientists hermetically seal off Elliot and his family, suggest the cold adult logic to the scenario versus the childhood wonder and discovery of knowing E.T. as a friend. Even after the adult scientists corner Elliot and E.T., they can’t duplicate the connection the boy has with the alien. They just don’t get it.  At one point, Elliot declares “Grownups can’t see him, only little kids can see him.” This is a tough companion to Spielberg’s later “Hook” and even shares a story connection with J.M Barrie’s tale of a boy who won’t grow up.

“E.T.” is one of the first films to show us the U.S. under the early indoctrination of “Star Wars,” as Elliot’s bedroom action figures and costumed trick or treaters are clearly strong with The Force. Spielberg may have been nodding in the direction of his friend George Lucas but he also showed us how firmly that movie had become a part of pop culture.

Among the many works that were inspired by (or flat-out ripped off) “E.T.” that came afterwards: “Explorers,” “Aurora Encounter,” “Making Contact,” the still-unreleased “P.P.: Planetary Pal,” “Hypersapien,” “Nukie,” “Harry and the Hendersons,” “Mac and Me,” “Magic in the Water,” Spielberg’s own “A.I Artificial Intelligence,” “Lilo & Stitch,” “Super 8,” “Earth to Echo” and the first season of “Stranger Things.” E.T. also recoils from Polaroids the same way Gizmo the Mogwai does in the Spielberg-produced “Gremlins.” Considering that Spielberg had recently directed Francois Truffaut in “Close Encounters of the Third Kind,” it’s not unreasonable to think of “E.T.” as “The 400 Blows” with an alien friend. Or, here’s “Close Encounters” from the point of view of a child and not Roy Neary.

The ongoing lore of “E.T.” is expansive, but here are some highlights-

* There has never been a sequel, though a draft of the abandoned “E.T. II: Nocturnal Fears” suggests Spielberg was ready to invest in the dark side of extraterrestrials (which he later did with the 2005 “War of the Worlds”).

* William Kotzwinkle wrote the bestseller, “E.T.: The Book of the Green Planet,” a pseudo-sequel that, like “Nocturnal Fears,” works as fan fiction but never would have cut it as a film.

* There is a deleted scene in which Harrison Ford is heard but never scene as Elliot’s smarmy principal; it’s a great scene and Spielberg should have reinstated it in his 2002 Special Edition. Instead, that re-release, with its newly added CGI and digital erasure of guns in the climax, was met with mixed response by fans who prefer the film without pixilated add-ons.

* Debra Winger has confirmed that she did some of the voice work for the title character, though she is one of several elements that went into the Oscar winning sound design.

When I reveal to young adults that I was a child in the 1980’s, I’m usually asked how bad my fashion choices were, if I had a lot of cassette tapes and if I looked like one of those kids from “The Goonies” (nope, I was a lot like Corey Haim in “Lucas”). There is an assumption that being a kid during the Reagan years meant you were immersed in pop culture at it tackiest. I can’t deny the enormous kitsch factor of a time when “ALF” was a popular sitcom but I cherished that time in my life. Look, some kids have the following as their big summer movies: “Transformers: Revenge of the Fallen,” “Spider-Man 3,” “Smurfs,” “Van Helsing” and “League of Extraordinary Gentlemen.” In addition to the first three “Star Wars” movies and anything released by Amblin Entertainment, I had “E.T. The Extraterrestrial.” What a great movie to grow up with.

'E.T. The Extra Terrestrial' has no comments