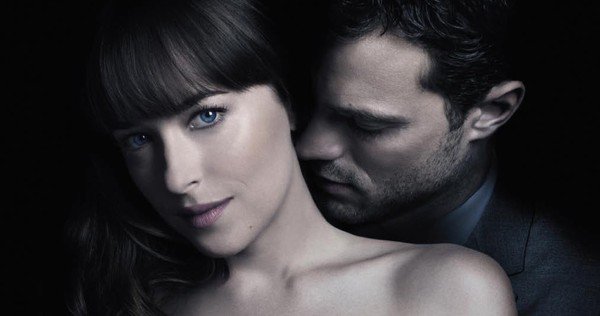 So here we are, the third film based on the publishing sensation, created by E.L. James as “Twilight” fan fiction, which she transformed into a trio of hilariously crappy “books”. Hearing my wife read me aloud passages of those unfathomable bestsellers was such a riot, we’ve gone to every one of these movies on their Thursday preview night. For the first movie, the line getting in was massive and the in-theater anticipation beforehand was audible. At one point, a very-excited (and presumably drunk) lady yelled out, “It’s Fifty Shades, people!” Fans of “Star Wars” seemed drowsy in comparison. Two movies later, the screenings grew quieter. Apparently,  the audience knows these movies are bad but can’t keep away. Seeing the first “Fifty Shades of Grey” felt like taking part in a scandalous social phenomenon. Now, its’ like seeing the latest Tyler Perry “Madea” or another “Saw.”

Initially, “Fifty Shades Freed” plays like a celebration of all the lavish “stuff” the 1% consider an average weekend: sudden, unplanned plane trips, excursions across a lake, a stay in a massive getaway and (my favorite scene in the movie) a shared bubble bath in front of a massive window with lots of paparazzi potential. The Greys chat with friends, sunbathe semi-nude and take a pointless, excitement-free hike. This latter event annoyed me, as there are no bear attacks, no sprained ankles and no even gets a sliver. They just go for a hike. It makes for a hypnotically dull, aggressively sleep-inducing movie.

Of course, the Greys do have sex and the sex scenes are to these movies what the car chases are for the “Fast and Furious” franchise: over-choreographed, laugh-inducing and never believable. As far as cinematic sex fantasies go, women and men deserve so much better than this. Some of the naughty encounters go by so fast, I didn’t know if the censors cut them down or if the movie is as bored of the Grey’s going at it as we are.

A real problem is how this interjects an unintentionally hilarious subplot about the dastardly “Jack Hyde” (a villain name as lazy as Snidely Whiplash) on top of the never-engaging scenes of business and married life. The movie isn’t smart enough to make the obvious point that the legally binding contract called marriage is yet another arrangement of sexual slavery shared between the Grey’s. Or that talking about an off-camera moment Christian shares with his sexual mentor (played in the last film by Kim Basinger) isn’t interesting if we don’t see it. By the way, why is Basinger not in this but Marcia Gay Harden is?

Sex has never seemed less interesting. This is the thought I carried with me as I left the screening to “Fifty Shades Freed.” To use a bedroom metaphor: if these movies started off as a hot seduction, they are now the equivalent of a bored, let’s-just-get-this-over-with quickie you forget five minutes later.

'Fifty Shades Freed' has no comments