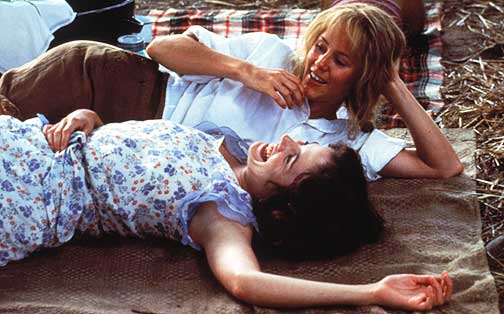 Jon Avnet’s film adaptation of Fannie Flagg’s novel “Fried Green Tomatoes at the Whistle Stop Cafe” is a surprising, quirky comedy with real bite. Flagg’s screenplay (which she co-wrote with Carol Sobieski) portrays the amusingly off-balance life of a middle age Southern woman named Evelyn Couch (played by Kathy Bates). Couch attends odd women’s groups in order to learn methods of adding zest to her marriage, though nothing seems to be working. Couch’s frequent visits to a retirement home leads her to meeting Ninny (played by Jessica Tandy), a delightful sprite of an elderly woman, who offers Evelyn comfort and inspiration. Ninny’s recollections of her past, involving tales of murder, a cafe and a unique friendship that spans a lifetime, begins to mirror and, eventually, merge with Evelyn’s own life.

The modern day sequences are bright, zany and full of broad humor, as Couch’s desire to please her lovable but clueless lug of a husband (well played by Gailard Sartain) go poorly. On the other hand, Ninny’s tales of long ago, involving the wily Idgie (Mary Stuart Mastrson) and the vulnerable, lovely Ruth (Mary Louise Parker) draw Couch in completely. In fact, they draw us in too, and are key to the film’s quiet power.

“Fried Green Tomatoes” is about exposing hypocrisy and unleashing one’s hidden, inner wild child. When released in the fall of 1991, it become an unexpected blockbuster and played well into the spring of the following year. I saw the film on my 14th birthday and, at first, wasn’t happy about it. My Dad took me to dinner and then drove me over to my favorite movie theater, Lahaina Cinemas. I had to choose from “Grand Canyon,” “Kuffs” or “Fried Green Tomatoes.” From the poster art, the Bates/Tandy film was the one I wanted to see the least but my Dad insisted we give it a shot. Clearly, he knew something I didn’t. From the first frame, with a car being pulled from a muddy river and Thomas Newman’s lovely score underlying the mystery of the image, the film completely had me.

Bates’ Couch is at that weird age where stories and memories connect us directly to our past. At some point, we all ponder who we are, who we’re meant to be and consider whether the two ideas match up. Couch declares “I’m too old to be young and too young to be old.” Couch’s journey mirrors that of Ruth and Idgie, who break from conformity and embrace a life of unconventional joys and unimaginable sorrows. The film asks what it means to be a Southern woman. Couch could easily become a servant for her husband but, like the characters of Ninny’s story, ignites an empowered, fiery spirit within.

This is great storytelling, with rich atmosphere and a solid device of presenting tales within the narrative (the one about the ducks in particular) that reappear at pivotal moments. The four lead performances couldn’t be better, making this the best and wildest of the late 20th century films about women living in the old south (including “Driving Miss Daisy” and “Steel Magnolias”).

While in theaters and in its popular shelf life afterwards, many have commented that the central relationship between Idgie and Ruth has lesbian overtones, either overtly or presented in a modest, suggested manner. Some complained that the film softened their relationship from the book, in the same way a lesbian couple was toned down for the film version of “The Color Purple.” The question of whether their relationship is both emotional and sexual is never addressed. However you view their relationship, the chemistry between Masterson and Parker is rich and their characters are beautifully constructed. Whether viewed as a timid depiction of a lesbian couple or a friendship with hints of something more, “Fried Green Tomatoes” won the 1991 GLAAD Media Award for Outstanding Film.

The African-American characters, particularly those played by Stan Shaw and Cicely Tyson, aren’t given enough focus but loom large in many scenes. Tyson makes a powerful contribution during a quiet death scene and Shaw embodies the daily bigotry he and others like him endured during that era. The issue of racism is dealt with directly, as Idgie and Ruth’s fondness for the black families around them are among the qualities that put them at odds with bigoted folks passing through town.

Every great movies has little scenes within that play like miniature motion pictures. Two such sequences stand out: Chris O’Donnell’s initially funny, gradually nerve wracking scene on a train track and Masterson’s obtaining honey from a tree of swarming bees are masterful scenes, obtaining suspense without the assistance of the music score.

There’s also a terrific moment in which Ruth takes the stand in a courtroom. Avnet keeps the camera on Parker, studying her face and never cutting away, before she makes a crucial declaration: “Because she’s the best friend I ever had and I love her.”

Released the same year as “Thelma & Louise,” “Fried Green Tomatoes” is the gentler film, though it has a genuine dark side and shares an aggressive, demonstrative depiction of feminism. The two films are about female empowerment as a declaration of dignity and self respect, have only a few sympathetic male characters, involve the murder of a loathsome abuser of women and end in an ambiguous though deeply meaningful way. The conclusion Couch comes to, regarding her friendship with Idgie and how it involves her husband, isn’t an easy or tidy fade out. Rather, the film ends on a hopeful note. Buildings may fall down or are broken apart by a sledgehammer, but our memories and the stories that make up our lives provide a bridge for what comes next.

'Fried Green Tomatoes' has no comments