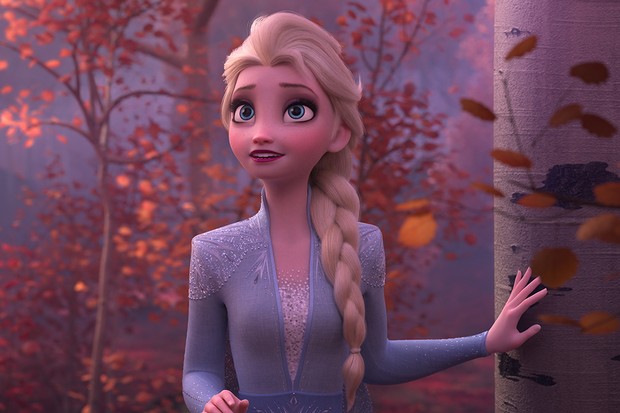 If you’re 12-years old or under, then you’ve been eagerly awaiting the arrival of “Frozen II.” Of course, that doesn’t mean adults won’t show up, too: I sat in a packed theater on opening day, visibly the only solo grown-up in a sea of kids and their parents. Yes, I have a little girl at home who loves “Frozen,” though she’s very young for the theater experience. I’m going to wait until she’s a little older and the right movie comes along…probably “Fast and Furious IX.” Just kidding.

In this follow-up, Elsa (voiced by Idina Menzel) is now one of the “good guys” and has a close friendship with her sister, Anna (voiced by Kristen Bell). No, Elsa has never apologized to Anna on-screen for the years of psychological abuse she put her through in the first movie (“Do you wanna build a snowman…okay, bye…”) but I digress. Now, Elsa is hearing voices, telling her to venture to far outside her kingdom. Anna and her wacky crew join the odyssey.

The new songs are duds all around, with not a single one of them displaying the wit and beauty of the original’s soundtrack. The screeching power ballad, “Into the Unknown” is strictly for karaoke masochists, while “Show Yourself” tries very hard to be “Let It Go” without sounding exactly like it (the title even has three syllables! You’re not fooling anybody, Disney!). The best of the new numbers, “Lost in the Woods,” isn’t memorable lyrically but the presentation is tops- it’s presented like a cheesy 80’s music video, complete with back-up moose vocals.

With the music a letdown, the jokes pretty scant and not very good, the emphasis is on the action and fantasy angles, which are effective. The sequence in which Elsa has to cross an ocean on foot is terrific. So are the moments where Sven the horse and a fire lizard (who resembles Pascal from “Tangled” too much) take the focus.

The emphasis is on death, which makes it a typical Disney movie, but it’s kind of grim for a movie aimed at small children. Large portions, dealing with the abused of indigenous people, the cruelty of colonialism and the mystical powers of nature, feel like re-heated elements from “Pocahontas.” In fact, the entire subplot involving tribes stuck in a forest world is half-baked and heavy-handed. Additional messages pop up, dealing with environmentalism and correcting the sins of one’s past; it’s all very PC and well-intentioned but there’s still too much going on here.

“Frozen II” is odd and disjointed, as well as over-written and tries to accomplish too much. However, it’s admirably ambitious and appears to be the middle chapter of a much bigger story being planned.

Unlike the diverting but wholly unnecessary “Toy Story 4” and “Maleficent: Mistress of Evil,” this Disney effort has clearly been produced with a lot of thought going into it (which is far more than most of their output this year).

A great quality of “Frozen II” is that it’s very different from the original- while it might be a mixed bag overall, at least you can’t say the filmmakers just repeated the first movie all over again. During the introductory scenes, it’s clear we’re just getting a chance to spend more time with these beloved characters, which is what audiences ultimately want (as evidenced by the popularity of the recent shorts, like “Frozen Fever”). It’s nice to see an event film that is so character driven and, in terms of the narrative, willing to take interesting chances.

Perhaps by the third film, Elsa’s self-actualization (which offers all sorts of rich subtext) will take center stage and not be soft-peddled. If the filmmakers can truly go there, fulfilling the potential of this world and offer a handful of songs that are good, then “Frozen III” will really be something remarkable. For now, I’m on the fence about the latest entry, which has stunning moments and a few rewards for the faithful but wasn’t worth the six-year wait. Still, compared to “Finding Dory,” “Mary Poppins Returns,” “Ralph Breaks the Internet” and the cluster of rotten live-action remakes, I’m grateful this succeeds at trying too hard, as opposed to coasting on what worked a long time ago.

'Frozen II' has no comments