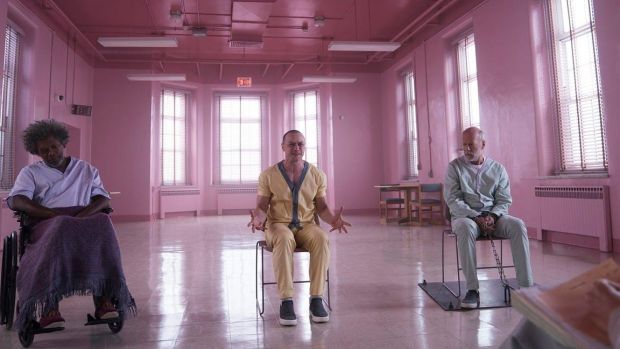 M. Night Shyamalan’s “Unbreakable” (2000) was a comic book movie ahead of its time. Arriving a year after the monster success of his spooky and deeply moving “The Sixth Sense,” Shyamalan’s “Unbreakable” was shrouded in secrecy. No one knew what the film was even about until the day it opened. The initial response was muted, if downright unenthusiastic, though I knew eighteen years ago it was something of a scrappy masterpiece. By taking the conventions and expectations of a superhero yarn and placing it in an utterly realistic setting, devoid of spectacle but driven by mood and the anguish of its characters, “Unbreakable” was truly novel. Not long afterwards came the TV series “Heroes” and Christopher Nolan’s post-9/11 infused Batman epics, just a few examples of comic book movie tropes being dissected and made freshly intimate. “Unbreakable” is Shyamalan’s masterpiece, among the most influential comic book movie ever made and possibly the best.

The long gestating “Glass” (both a sequel to “Unbreakable” and the recent “Split”) is, like “Unbreakable,” a comic book superhero art movie, talky, character-driven and minimalist. It’s odd at odds with every other comic book movie currently playing and offers more perspective, experimentation and fresh observations than any of them.

David Dunn (played by Bruce Willis) is still at large, using his supernatural strength and ability to spot criminals on daily “walks.”. Dunn tracks down another at-large outsider, the hideous Kevin Wendell Crumb (played by James McAvoy), a serial killer with multiple personalities. Both Dunn and Crumb are captured and placed in a bizarre institution, where Dr. Staple (played by Sarah Paulson) studies them, insists they are delusional and curable. Meanwhile, Dunn’s former nemesis, Mr. Glass (played by Samuel L. Jackson), is being held in the same institution, waiting for his moment to strike.

Carried by three dialed-in, on-point performances by the three leads, an ambitious screenplay and a tone both quirky and eerie, “Glass” surpassed my hopes of how Shyamalan would continue his personal take on comic book movie conventions.

McAvoy is even more astonishing here than he was in “Split,” furthering the nightmare logic of his funny/scary characters (the end credits list him playing no less than 20 personalities). Jackson is superb, easily slipping back into one of his most iconic and fascinating roles and taking Mr. Glass in complex new directions. No less excellent is Willis, who again looks inward and allows us to see Dunn’s introverted vulnerability and towering outer strength.

There are some well staged fight scenes, particularly the intense confrontation that sets the first act in motion. Shyamalan’s cinematic approach here is closer to the playful, chilly approach of “Split” over the more controlled, Hitchcockian filming of “Unbreakable.” This is superior to “Split” and manages to seamlessly blend the structure of both films. Needless to say, those unfamiliar with the prior films will be lost.

There are stand-out moments that pass quickly, such as a nod to the “Psycho” shower scene and a clever homage to the “Oldboy” hallway fight scene (featuring Jackson in the shot even acknowledges Spike Lee’s underestimated 2013 remake).

Shymalan’s patient storytelling, occasionally on-the-nose dialogue and earnestness will drive some viewers crazy. While a handful of his post-“Unbreakable” works were interesting failures or embarrassing disasters, Shyamalan is in control here, using a lower budget, reigned in approach that, nevertheless, doesn’t diminish his imagination. The surprising final confrontation and the odd yet satisfying final scene are just two examples of how the writer/director is taking calculated risks that defy expectations and are worth the inevitably divisive audience reaction.

Not everything works, such as bringing back side characters from the prior movies and some of the big plot twists are overly vague.

Yet, consider exactly what Shyamalan’s intriguing and personal overall point: is there anything worse than having our voices suppressed or being denied the right to be who we truly are? As a depiction of an artist’s struggling with identity (as well as an ode to the filmmaker’s Philadelphia home) this may wind up being The Ultimate Shyamalan movie.

Finally, if “Unbreakable” was ahead of its time, then “Glass,” coming out during a Marvel/DC movie saturation and a worldwide comic book movie dominance, is also defiantly out of step and subversive. The timing couldn’t be more right for this terrific film.

'Glass' has no comments