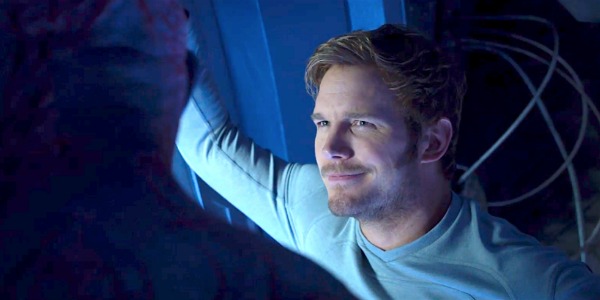 I knew Guardians of the Galaxy Vol. 2 was going to work from the first scene, which somehow gives audiences exactly what they want but offers a sly twist. The film opens with an intergalactic crew of space adventurers, led by Starlord (Chris Pratt, former Bubba Gump Shrimp Company server in Lahaina). Along with the green, no-nonsense Gamora (Zoe Saldana), the hulking, irony-free Drax (Dave Bautista), Baby Groot (voiced by Vin Diesel) and the itchy trigger-fingered Rocket Raccoon (Bradley Cooper), the Guardians battle a giant squid monster. The laser guns are blasting away as the massive tentacles bat away our heroes like flies… except Groot isn’t paying attention. The tiny, adorable Groot, literally a twig with eyes, is distracted by “Mister Blue Sky,” which he dances to as the mayhem occurs behind him. The camera follows Groot as he boogies to ELO, ignores his comrades and even distracts them by waving during the battle. It’s the first of many inspired scenes in this thrilling, frequently hilarious sequel.

I’ll give my usual scant plot description, since, as always, the less you know going in, the better. This time, Starlord and his fellow Guardians are persuaded to visit the home planet of the enigmatic Ego (played to perfection by Kurt Russell). Tension builds between Starlord and Gamora, who doesn’t trust Ego and is in the midst of a conflict with her revenge-bent sister, Nebula (played to the hilt by Karen Gillan).

Pairing Pratt with Russell was a master stroke, as both share a similarly easy-going approach to acting, as well as great hair (Russell’s mane in this movie is Hall of Fame worthy on the Russell Scale). Everyone here gives their role the charisma and commitment required (including Saldana, who has much more to do this time around). Pratt may be the headlining star but Bautista’s sharp comic timing and Cooper’s inspired vocal work as Rocket are especially terrific. As for Diesel, I don’t mean to pick on him so soon after his Big Acting moments in The Fate of the Furious. Still, it’s gotten to the point where anyone could provide the voice and mere three lines of Groot (the CGI does far more to bring the character to life than his vocal performance).

To be picky, some action sequences become overly chaotic and the central villain is always best represented by a flesh and blood actor, not a clunky CGI representation. I wonder if anyone noticed how the screenplay is awfully similar to the Sybok storyline in Star Trek V: The Final Frontier (all that’s missing is Pratt asking the villain, “What does God need with a starship?”).

There are a handful of set-ups for the sequel in the end credits but the key to this and the best Marvel movies is that it stands firmly on its own. Both Guardians play like cheeky send-ups of Star Wars, Star Trek and comic book movies in general. Considering how pompous, overly serious, exposition-packed and openly franchise-burdened most comic book movies are, it’s refreshing to see the genre get an overdue roasting.

Just when things get especially dramatic, Pratt offers a heartfelt monologue about David Hasselhoff having the “voice of an angel” and earnestly discussing his career choices. Look, I love most straight-faced comic book epics but really, playing most of this for laughs was a smart idea.

Writer/director James Gunn once again infuses an agreeably juvenile sense of humor to a state of the art space opera. It’s like watching Kevin Smith’s Rogue One. While the emphasis is on the jokes, the film has a lot of heart (Rocket in particular always gets the most quietly touching moments). With even more thrilling action, funnier one-liners, better song selections and a great villain this time around, stating that Vol. 2 tops the original is too easy. The hard part lies with Gunn: with two wonderful Guardians under his belt, can he possibly make the third one as good or even better? If he musters a perfect trilogy, I’ll be dancing like Baby Groot at a giant squid shoot-out.

'Guardians of the Galaxy Vol. 2' has no comments