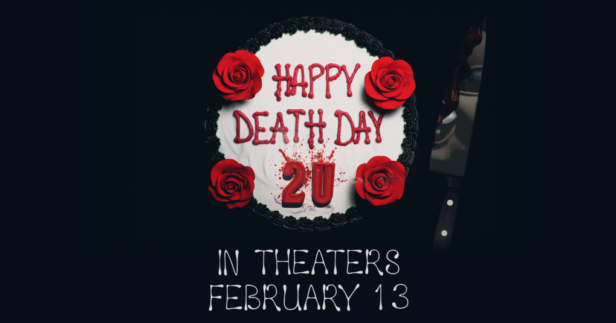 Two years ago, the busy, lucrative Blumhouse Productions horror company unleashed “Happy Death Day” on teen audiences and scored a solid hit. Depicting a self-absorbed college student named Tree (played by Jessica Rothe), who is murdered by a mad slasher and re-lives the fateful day again and again, it had the nerve to rip-off “Groundhog Day” and brought very little horror or humor to the scenario. Now, we have the sequel which, like the first film, is a tedious, unoriginal dog.

This time, it’s not Tree but her boyfriend’s roommate, Ryan (played by Phi Vu), who sets the story in motion, as a morning stroll establishes that he’s stuck in a time loop. I liked this opening, which not only teases us with the promise of a different character leading the film but showcases an Asian actor who could clearly carry this all by himself. Unfortunately, after setting up the plot, we’re back to re-doing the first film, though without the immediacy and quasi-freshness of the central gimmick.

While no one dares bring up “Groundhog Day” again, we get a shout-out to “Back to the Future Part II.” Actually, at best, this resembles the justly forgotten “Project Almanac,” as the emphasis on a sci-fi angle offers a lot of “science” but only in the loosest sense. This sequel dials down the slasher movie angle from the previous film and suffers for it.

Like the film itself, Rothe’s performance is all over the place- she’s intense, goofy, over-the-top, sincere and cartoonish. This a busy performance but not a great one.  Rothe is surrounded by actors who seem ready for sitcom roles and aren’t pushing their scenes as hard as she is (which isn’t always a bad thing). You know the movie is in trouble when the main characters are so annoying, you’re rooting for the masked killer to clean house. As sequels go, this is a slight step up from the original but weighed down by too many dud gags and genuinely rotten scenes.

The little bits that work are undermined by a frequently shifting and mostly juvenile tone that cancels out moments with genuine sentiment. Lengthy, earnest scenes of Tree contemplating her deceased mother clash with all the cartoonish violence and “Sliders”-level teen science shenanigans.

Then there’s the sequences where Tree once again kills herself ,over and over again, for comic effect. Making a joke of teen suicide worked in “Heathers” but feels especially tasteless and glib here. The film doesn’t earn it edgier moments, as nothing truly seems to be at stake. Once again, Christopher Landon directs and will hopefully align himself with better material next time.

The sci-fi angle of “Happy Death Day 2 U” is admittedly ambitious, as is fashioning a sequel that will ostracize fans of the original by fully dialing down on what it so popular. Yet, this somehow feels even more monotonous than the first movie. The filmmakers should have taken a big hint from “Groundhog Day”: if the Bill Murray classic never spawned a sequel, then neither should the bad teen horror rip-off.

The ending (or series of endings) includes a slapstick set piece, with a teen thespian pretending to be blind (its easily the film’s irredeemable moment). The culprit of the killer is a real who-cares unveiling, the love story doesn’t click and the awful mid-credits scene threatens us with yet another sequel.

If we manage to get “Happy Death Day 3,” it will, along with the “Pitch Perfect” series, provide yet another truly grating trilogy we’ll all be embarrassed we liked in a decade.

'Happy Death Day 2 U' has no comments