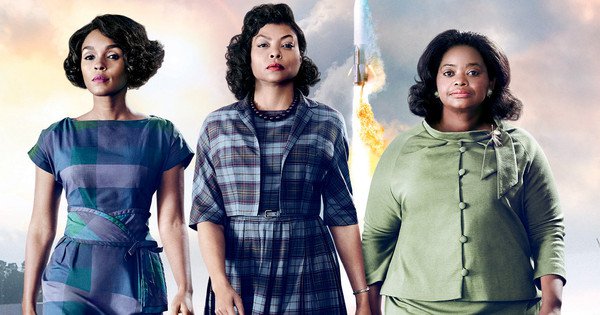 The space race of the 1960’s defined a generation and leading America to be the first to put a man on the moon is one of John F. Kennedy’s crowning achievements as President. We know the men who risked their lives in service of our country to reach the moon and “touch the face of God”: John Glenn, Alan Shepard, Neil Armstrong, and Buzz Aldrin. These men were the heroes that were front and center during this exciting and tense race to space. Behind these men though were hundreds, if not, thousands of men and women working overtime to make sure that our heroes had reliable equipment and data to lean back on and be secure in knowing they were in good hands.

A new film by director Theodore Melfi is focusing in on the people behind the curtain of the space race. In particular three African-American women who also happen to have superior brain power and testing the limits of both outer space and tolerance at 1960’s N.A.S.A. “Hidden Figures” tells the story of Katherine Johnson, Dorothy Vaughn, and Mary Jackson who all work for West Area Computers, a segregated section of N.A.S.A., doing computations in service of the space race heating up between the U.S. and Russia. These ladies not only have the pressure of the U.S. government on their back, but have to deal with raising a family, furthering their education in service of their profession and discrimination in 1960’s Virginia. These women will not only successfully navigate their lives outside of N.A.S.A., but will define and further the cause of women of color in the workplace.

“Hidden Figures” is a fantastic family film that not only entertains, but educates about discrimination and even is a history lesson of what pressures were being laid to bear at N.A.S.A. during this tense time. This film is actually a perfect accompaniment to one of the best pictures of all time about the men at the forefront of the space race, “The Right Stuff”. Taraji P. Henson plays Katherine Johnson and she gives an understated, but powerful performance of a woman putting her life, family, and work in order after the death of her husband. Octavia Spencer plays Dorothy Johnson, she is the glue that keeps this trio together and supporting each other through their time at N.A.S.A.

The revelation here is Janelle Monae as Mary Jackson, her performance here out does both her co-stars. She has a real grasp of the material she’s working with. She portrays a gentle strength of character. She becomes increasingly likeable and she is the calming force of her family as Mary. When she is not on screen you really start to miss her. I believe that she could be nominated for an Oscar for her performance here. If her singing career doesn’t work out, she seems right at home on screen. The final stand out and Oscar worthy performance goes to Kevin Costner who portrays director Al Harrison of the Space Task Group. Costner’s performance is rock solid as the gruff director. He sees past color and gender and only cares about the person who can do the job and protect the men that he’s been tasked to put into space. Honorable mention goes to Glen Powell who plays John Glenn. His portrayal of Glenn was so likable and down to Earth, you can’t help but like him and according to the “real” Katherine Johnson, Glenn trusted her work on his space flights.

“Hidden Figures” is getting a lot of praise and a possible best picture choice this Oscar season, although I don’t agree with that sentiment, this movie is still a wonderful piece of filmmaking and should not be missed. It’s nice to watch a film that I’d be more than happy to take my family to without having to worry about questionable content and more importantly have something to teach about our history on different fronts. Don’t keep these figures hidden from your view.

'Hidden Figures' has no comments