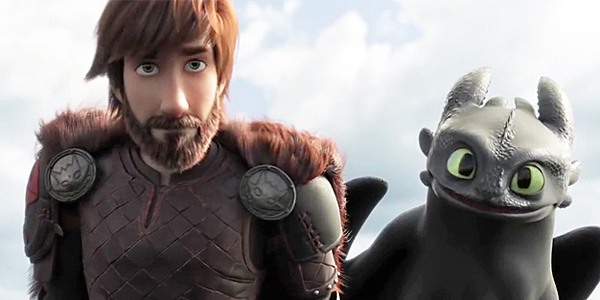 It’s been five years since we last met up with Hiccup, the clumsy but remarkably brave young warrior who best friend is Toothless, a sweet and ferocious dragon. The two live in Berk, a vast land shared by Vikings and hordes of dragons, who now live in harmony. A ruthless dragon hunter named Grimmel threatens not only Hiccups’ relationship with Toothless but the safe and harmonious structure of Berk.

The original 2010 film didn’t really impress me, particularly with its predictable, Dad-you-must-listen-to-me subplot that weighed the whole thing down. With “How to Train Your Dragon 2,” the story moved past the father/son friction, advanced the story considerably and introduced new characters and scenarios that were heartbreaking and poetic. It’s one of the best films of 2014. This new installment doesn’t soar as high as the prior film but the third and presumably final “How to Train Your Dragon” is a satisfying and beguiling film.

The heart of these films is the “E.T.”-like friendship between Hiccup and Toothless, which is somewhat like a human/puppy dog dynamic but has deeper layers. Note a sequence where Hiccup coaches the dragon on how to woo another dragon (yes, of all things, this is a love story): it’s a new take on the famous “courting” scene from “Cyrano De Bergerac,” in which a hidden teacher encourages a young romantic on what to say to the woman he loves. Here, its presented without dialogue but body language, demonstrating the language barriers between a human and a flying, fire-breathing reptile. It’s a wonderful set piece.

The stumbling block for this series, however, has always been the characters who don’t fly or breathe fire. Hiccup has never been a character I’ve found all that interesting.  Jay Baruchel’s nasally, pseudo-Christian Slater vocals haven’t won me over, though he still gives his line readings the necessary conviction. None of the human characters are all that enticing- we’re here for the dragons, who are always magnificent, quirky and designed to look fierce and vaguely comical.

The second film introduced Cate Blanchett as Valka, Hiccup’s mother; the character is arresting and gave that film a real narrative jolt. Unfortunately, Blanchett’s character is mostly in the background of the third film. However, no one has it worse than Gerard Butler, who has two quick flashbacks as Hiccup’s father Berk but is otherwise absent.

When the focuses on Toothless and his goofy courtship of another Night Fury dragon, the film is truly magical. The richness in the creature designs, movements and personalities is in full view when we’re in the presence of these flying wonders. On the other hand, when the spotlight is on Hiccup’s annoying Viking buddies, the movie crassly courts a young audience with sidekicks who are distractingly contemporary.

Grimmel is a strong villain and not merely because he’s evil; as voiced by the great F. Murray Abraham, this Ahab of the dragon world is also a condescending jerk who constantly mocks anyone within ear shot. I hate guys like this. After his establishing scenes, I waited eagerly for a dragon to step on him.

Late into the film, we’re given a tour of a new world (on the back of a flying dragon, no less); the imagery is so jaw-dropping, I was grateful to have attended a 3-D version (in fact, this is one of the best experiences I’ve ever had seeing  a 3-D movie). In some ways, I go to the movies to experience new worlds and visions, to see what the filmmaker’s dreams and imagination can create. The best parts of “How to Train Your Dragon: The Hidden World” provide that very thing- a means of immersing the viewer into a vivid, exhilarating children’s fantasy. This franchise may have peaked a movie ago but there’s still lots here to cherish.

'How To Train Your Dragon 3' has no comments