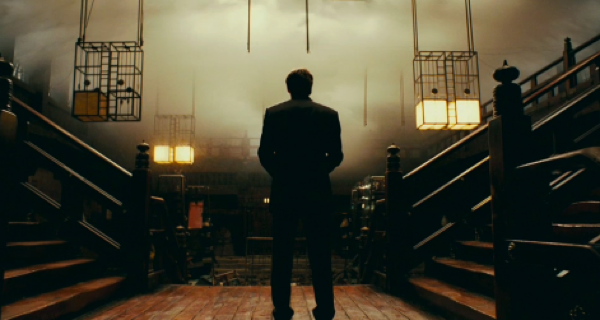 The “look” of dreams is something most movies can’t pull off without resorting to silly touches like fuzzy photography and dancing dwarves. The list of films that convey the visual and logistical nature of dreams with any accuracy is short: they include “Eternal Sunshine on the Spotless Mind”, “Waking Life”, the original “Nightmare on Elm St.” and “Inception”, the new thriller from Christopher Nolan. This is a film so rich with imagination and entertainment value, the 2 and half hour running time didn’t feel overlong; actually, I felt like I sat through two really terrific movies.

The story and the rules of the world within are meant to be discovered by the filmgoer as it unfolds, so I’ll reveal as little as possible. Leonardo Di Caprio stars as the leader of a team who commit corporate espionage in the dream world; the way this works is played out in a dizzying opening scene, followed by thorough explanations that offer audiences ideas both simplistic and incredibly dense on how the mind works when we’re dreaming.

A concept I loved in both the original and remake of “Solaris” resurfaces here: what if a version of someone you love can materialize, only it’s the way you remember the person, warts and all, and not a truthful representation, since your perspective clouds the whole picture. Marion Cotillard portrays the character in question and gives the film’s most chilling performance. Di Caprio’s character is haunted by the memory of his femme fatale wife and it’s a similar role to the one he just played in “Shutter Island”; this is not one of his richest performances, but he’s solid and really, you’d have to look back to “The Beach” ten years ago to find a truly bad film that he appears in. Joseph Gordon-Levitt plays one of Di Caprio’s side men and has what will likely go down as one of the best movie fight scenes of this or any year.

To compare the film with Nolan’s “The Dark Knight”, I’ll admit that there are no performances that stand out the way Heath Ledger powered that film. Yet, this is an ensemble piece without a single bad performance and the story and characters are more focused than either of the Nolan “Batman” films. There are plot elements here that will be familiar to fans of Nolan’s other films: “Memento”, “Insomnia” and “The Prestige”, which, come to think of it, all deal with the nature of sleep and alternate realities.

Naysayers will complain that the film is too long, too talky and too confusing. The truth is that I can’t even tell you if there are plot holes because each scene is so layered with detail, there may be lots of story flaws that I missed. Frankly, I could care less: when a film can be this wonderful the first time, I’m more than happy to go back again and again to see the details I inevitably missed. Two weeks ago, I complained that so little effort and passion had gone into the latest “Twilight” installment. Here is the opposite, a film packed with more smarts, surprises and awe inspiring moments than most films this year. This is what we’d have if those sequels to “The Matrix” lived up to and surpassed the first film.

Nolan’s dream world often resembles a no-holds-barred 007 fantasy and his closing scene moved me to tears and still tickled my mind. In a summer overloaded with sequels, remakes and lobotomized time killers, this film is a dream come true.

'Inception' has no comments