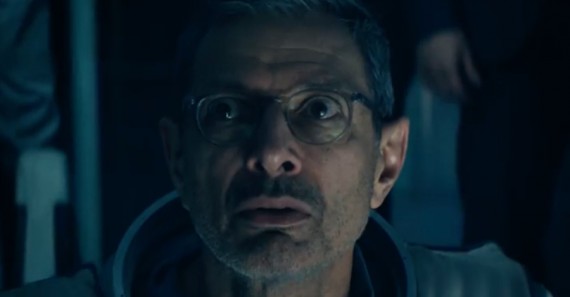 Everything comes full circle. The weekend “Independence Day: Resurgence” opened, I was enjoying a sequel of my own: my twenty-year high school class reunion. The first “Independence Day” (or “ID4,” it’s more popular label) came out the summer I graduated and became the biggest hit of its year. During my freshman semester of college. It seemed every male dorm room I visited had either a poster of “ID4” or Jenny McCarthy (I had a poster of Keanu Reeves in “Feeling Minnesota” because…it was 1996 and I was edgy, I guess). Some movie buffs liked to brag how they saw “ID4” on July 2-4th 1996, when the film took place and proudly displayed their ticket stubs for proof. It was like holding a license to be a patriotic movie goer. The film frequently plays on basic cable and maintains its popularity.

Roland Emmerich’s twenty-years later sequel is much bigger and, remarkably, even more colossally stupid than the original. Jeff Goldblum returns as the scientist who cracked the alien code the first time out. The world has rebuilt itself, put “petty differences” aside and established world peace, those tentacle-wielding monsters from outer space return to trash the Earth. Again.

Emmerich is still stealing from Steven Spielberg, James Cameron, Ridley Scott, George Lucas and himself. He’s better at creating memorable visuals than crafting a consistent story with solid acting and disciplined screenwriting. Emmerich’s movies are fun carnival rides, though he’s spent the past two decades helming turkeys that aim to top “ID4” (like his “2012”) and never come close.

I should applaud Emmerich for avoiding a bloated running time but strangely, making “Resurgence” two hours was a mistake. It’s been so tightly edited, there are no scenes, just a series of moments. If any movie would benefit greatly from a longer director’s cut later on, it’s this one.

The epic-sized bus chase at the very end is the film’s best sequence and gives audiences the iconic imagery they expect from Emmerich. Otherwise, none of the characters develop much and some returning “ID4” cast members are killed off very early (is nothing sacred?!).

Attempts made to make the cast more international result in one-note stereotyping and offensive caricatures. The younger cast members (standing in for absentees like Will Smith and Harry Connick Jr.) give dud performances but Goldblum still makes this a master class in quirky scene stealing. Bill Pullman returns as the former president and has a more intriguing character to play this time. However, his big speech is cut short. Viveca A. Fox returns as a doctor instead of a stripper. It seems an alien apocalypse made her re-think her day job.

There are lots of delicious plot set ups that go nowhere or remain unexplained: Earth’s military now uses extraterrestrial technology, Sela Ward is playing a Hillary Clinton-esque president, and the mother ship has vast foliage. More time should have been spent with all of these intriguing additions.

There are clever nods to the original (such as a sly acknowledgement of the original’s White House explosion) and most of the laughs are intentional (I think). Oddly enough, this is closer to enjoyable but brain dead “ID4” rip-offs, like “Battleship,” than the real thing. It’s too silly and disjointed to be a great movie but Emmerich’s delivery of jaw dropping spectacle carries this farther than it deserves.

“Independence Day: Resurgence” plays like the ultimate Emmerich movie, with pieces of his original, “Godzilla,” “The Day After Tomorrow” and even his early, cheap “Moon 44” in the mix. Emmerich’s “Stargate” remains his masterpiece, while both of his alien invasion movies are as yummy as cotton candy and as bad for our digestive system. Everything comes full circle.

'Independence Day: Resurgence' has no comments