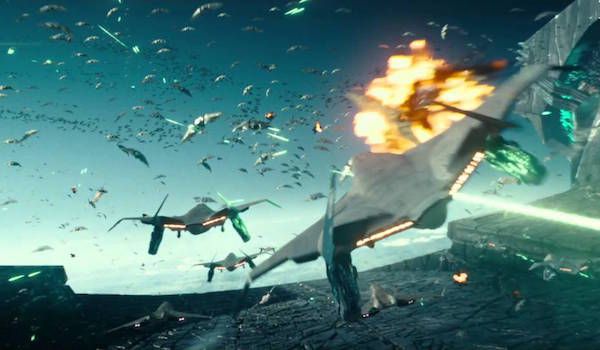 In 1996 a film that helped lead to a resurgence of large scale alien invasion films moving forward in Hollywood was released. Independence Day wowed critics and audiences with its spectacular special effects and patriotic themes and became the highest grossing movie of 1996. 20 years later, a sequel to that film has finally hit the cinema. Independence Day: Resurgence is set to recapture our imaginations. In the current cinematic climate of action packed films featuring aliens, gods and superhero groups, can the ID4 sequel make a lasting impression on the general public?

Independence Day: Resurgence sees the return of the majority of the cast and crew from the original film from 1996. Roland Emmerich the man responsible for the first film along with 2012 and White House Down, returns to the director’s chair. Jeff Goldblum, Bill Pullman, Judd Hirsch, and Brent Spiner also return to reprise their roles. Along for the ride are a new cast of characters including Liam Hemsworth, Jessie Usher, Maika Monroe and Charlotte Gainsbourg.

This new adventure begins 20 years after the defeat of the aliens from the first film. The world has come together after the attack to harness the alien technology and advance their own including their defenses. The remnants of the alien warships on Earth are starting stir and has raised the concerns of Dr. Levinson (Jeff Goldblum) and his former colleague Dr. Marceaux (Charlotte Gainsbourg). As they begin to investigate an alien ship in Africa overseen by an African Warlord (Deobia Oparei), former President Whitmore (Bill Pullman) and Dr. Okun (Brent Spiner) are experiencing psychic visions due to their link with the aliens from the first film. Then the current defense systems pick up an object in deep space that could be a new threat that needs to be taken out. During an impromptu celebration of the victory over the new lifeform, Earth is overshadowed by a 3,000 mile wide spaceship. Earth may have just destroyed its only hope and what has arrived may just lead to the destruction of the human race.

Independence Day: Resurgence tries its best to recapture the magic that made the original such a success. Employing both old and new characters, ID:R starts off with promise. We are introduced to Earth Space Defense. The first line in protection of Earth against alien forces. The main pilot of our story we meet a cocksure U.S. pilot, Jake Morrison (Liam Hemsworth). He’s a brash, authority defying hotshot. He does his best to fill the shoes of Will Smith’s outspoken character from ID4. Dylan Dubrow-Hiller (Jessie Usher in an unimpressive performance), the son of Steven Hiller (Will Smith) who is now passed, is the face of the new pilot fleet to the world. Jake and Dylan share a turbulent history in the military along with Jake’s fiance and daughter of former President Whitmore (Bill Pullman), Patricia Whitmore (Maika Monroe). These pilots are ready to take on the threat and do what they can to save Earth. These characters are supposed to pull in a new audience while Jeff Goldblum and Bill Pullman provide legacy support. Unfortunately, for this film it does come together as successfully as the original.

What Independence Day: Resurgence lacks is the heart of the first film. Jeff Goldblum, Bill Pullman, and Will Smith were the emotional backbone of the original. Here Liam Hemsworth and crew try their best to stand in for them, but are not successful. The other issue with this film is that it shares the same bloated, overstuffed feel as the first film. Too many characters and too many subplots to keep track of make the film lose focus too often. One more glaring problem are the myriad of plot holes that exist here. Just to name one, Earth has harnessed alien tech to their advantage. Advanced ships that make the jump from Earth to the Moon in minutes, a satellite system that covers the Earth to detect any threats, advanced jet propulsion systems, and rotorless helicopters. But yet, mankind still uses traditional four wheel transportation that uses gas and at least in this future a common iPhone for communication. This maybe a small quibble, but it doesn’t feel as if this story thread was used to its full potential.
Full potential is the biggest problem with this film. In the 20 years that separates this film from its predecessor, you’d figure that a story could have been crafted to take advantage of the time that has passed. What it feels like here is a rush to get it to the screen in time for its 20 year anniversary. This should not have been the case. While I’ll will admit that some of the good feelings from the first film do exist in small doses and the action scenes evoke what made the first film a unique experience, in the end, not even the great Jeff Goldblum and Bill Pullman can rescue this film from itself. Instead of moving the film in the new direction it sets out for the audience in the beginning of the movie, it’s too preoccupied with trying to be ID4 for the 21st century. Hopefully, with the sequel that’s coming the filmmakers can course correct and get us all behind the Earth’s Defense Force to fight the alien horde because they are coming whether we like or not.

'Independence Day: Resurgence' has no comments