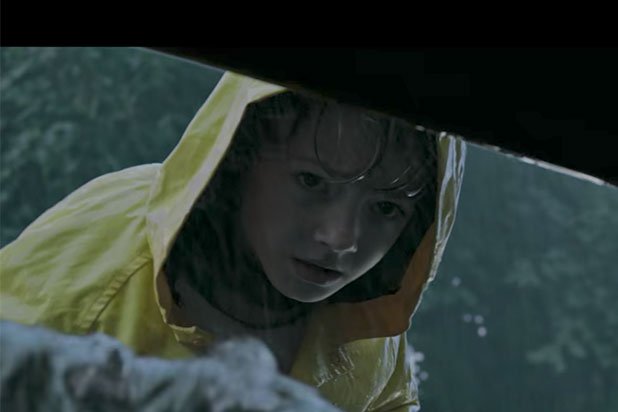 Following decades of being remembered as a massive paperback staple and a well-remembered televised mini-series, Stephen King’s “It” has finally been made into a proper, R-rated motion picture. Although the setting is now the 1980’s and portions of the novel dealing with the child protagonists as adults has been tossed, this adaptation is faithful, intelligent and lean.

In the town of Derry, Maine, children have gone missing. A cluster of kids with a troubled upbringing form “The Loser’s Club” to comfort one another and battle an entity that sometimes materializes itself as “Pennywise the Clown.” The “it” the children battle can transform itself into anything they fear and devours them when they’re at the peak of terror.

Not unlike Mr. Dark in Ray Bradbury’s “Something Wicked This Way Comes” (who also resides in a carnival-like setting), Pennywise is a stand-in for every adult-induced abuse, betrayal and hypocrisy these kids encounter. The Loser’s Club includes Bill (Jaeden Lieberher of “St. Vincent” and “Midnight Special), whose little brother has gone missing, quipster Richie (Finn Wolfhard of “Stranger Things”) and Beverly (played by Sophia MIlls), who faces a home life is nightmarish as her male friends.

Andy Muschietti’s enthralling adaptation of Stephen King’s “It” plays like a winning cross between “The Goonies” and “A Nightmare on Elm Street,” owing a great deal to the latter. There’s even a smart reference to “A Nightmare on Elm St. 5- The Dream Child,” which also dealt with a young girl struggling with  personal demons in the form of a boogeyman. Unlike the nostalgia-soaked “Stranger Things” and “Super 8,” “It” keeps the 80’s artifacts mostly in the background (except for a priceless running gag involving a pop group).

I read “It” when I was in middle school and preparing for the Tim Curry-led TV adaptation. The durable but clunky 1990 TV mini-series may be dated but, at 3 hours and 12 minutes, did a better job at telling this story. Yet, I greatly prefer this version. This portrait of outsider kids, forming profound friendships and finding the inner strength to face a world of grown-up monsters, hits hard because of how relatable it is. As a compassionate depiction of kids overcoming school bullies, learning to be empathetic and open-minded about those who are different from them, “It” has so much more to offer than just the “scary stuff.”

While the recent “Annabelle: Creation” may be the scarier movie, “It” is a more important work. Watching these kids face the literal and figurative monsters in their lives makes for a tougher, more visceral and meaningful work than either “Stranger Things” or “The Monster Squad.” Because the real things plaguing these kids are so plausible and horrific, the stakes seem higher and their collective bravery so much more rewarding.

I really loved these kids and cared about what happened to them. Unlike most horror film villains, Pennywise (played by Bill Skarsgard in a terrific, unhinged performance) is loathsome and impossible to root for. A touch that truly unsettled me: the way Pennywise salivates when he’s terrorizing his prey.

A few of the young performers overact on occasion, but a bigger problem is that some of the characterizations are too slim. The 135-minute running time hits one narrative highlight after another but somewhat shortchanges the quieter character moments.

Argentine filmmaker Muschietti  made his directorial debut with the Jessica Chastain-led “Mama” in 2013 (based on his effective 2008 short film of the same name, which can be found on YouTube). While “Mama” has some brilliant moments, the ending is a tonal disaster. With “It,” he made the wise choice to split King’s 1,138-page into two parts, with The Loser’s Club as children and 40-year old adults getting their own films. As a stand-alone achievement, “It: Chapter One” is a near-masterpiece, full of soon-to-be-iconic moments. Muschietti has shaped a frightening, funny and genuinely moving film.

'IT' has no comments