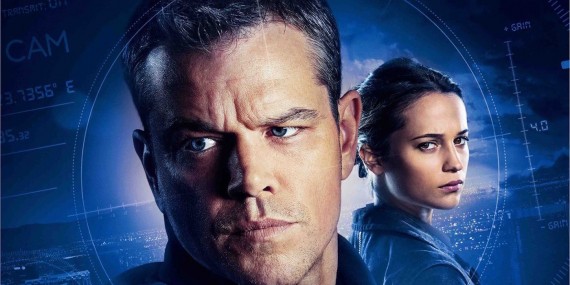 The Bourne series of movies are great potboilers full of political intrigue, shadow groups, and agents with unbelievable skills. Matt Damon has made Bourne one of his most memorable on screen characters. Just a few years ago, the Bourne series went in a new direction with a new protagonist called The Bourne Legacy. It was not received well by fans of the series even though it was a better film than the fans lead on. What was missing? Matt Damon. Now Matt is back in the role that he defines. After all this time, are we ready to follow Bourne through the shadows to find out what conspiracy from his past will define his future?

Jason Bourne is a direct sequel to the Bourne Ultimatum. Bourne is still hiding in plain sight avoiding government agencies bent on his demise while he tries to uncover more puzzle pieces to put together a past he knows little of. A former CIA agent and ally of Bourne from his past, Nicky Parsons (Julia Stiles), working with a hacktivist group, has uncovered a secret assassination program by the CIA. More importantly she has unearthed information about Bourne and his recruitment. Parsons has no choice but to track down Bourne and share the information that hits closer to Bourne’s roots than even she realizes. What Parsons intrusion into a government mainframe has done has alerted them to her whereabouts that will lead them straight to her and Jason Bourne.

Jason Bourne is a pulse quickening, globe trotting kinetic political thriller. Director Paul Greengrass is no stranger to Bourne or this kind of intelligent action thriller. Greengrass has returned to the series and crafted a respectable follow up to Bourne Ultimatum. Ultimately, that is Jason Bourne’s biggest problem. The third film felt like a fitting ending to Bourne’s legacy and Jason Bourne feels too familiar. Although Jason Bourne is fitting Summer movie fare with an incredible Las Vegas finale, it just feels like the filmmakers are putting Bourne through the wringer unnecessarily. Even with its more of the same feel the film’s biggest bright spots are it’s supporting cast. Tommy Lee Jones as CIA Director Dewey, Vincent Cassel as the Asset, and Alicia Vikander as Heather Lee all do an outstanding job making the proceedings quite intriguing.
Jason Bourne is a smart action picture for those that love political thrillers filled with conspiracy theories and people that aren’t always who they appear to be. It feels after all this time as if Jason Bourne needs to find a little peace after his fourth bout with an ever intrusive government. But knowing Bourne, there will be a never ending cavalcade of questions and assassins that will keep him on the run and always looking over his shoulder. I expect we’ll be seeing Bourne fighting for his life and looking for more answers on the big screen soon enough.

'Jason Bourne' has no comments