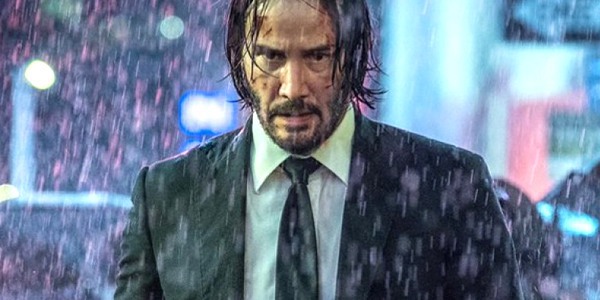 There was once a movie called “John Wick,” in which Keanu Reeves played “the boogeyman of assassins,” who avenges the shooting of his dog by murdering a lot of people. In “John Wick: Chapter Two,”  he more than triples the original film’s body count before the first hour is up. Now, in part 3, with Wick and his new dog on the run in a city full of killers wanting to cash in on his $14 million bounty, Wick must kills hundreds of people. Again.

While I enjoyed the first “John Wick,” it was a skillfully made sleeper that took its paper-thin premise as far as it could (You shot my dog? Prepare to die!) and nothing more. Really, “John Wick” was just slightly better than a direct-to-DVD release. On the other hand, “John Wick: Chapter Two” upped the ante in every way; it’s one of the best action movies I’ve ever seen, a wildly stylish and thrilling pulp crime drama. It’s not that the third “John Wick” has run out of steam or feels tired. Actually, it gives the audience exactly what it wants. Yet, it also gives us too much story, overlong fight scenes and subplots on top of subplots that suggest the filmmakers never heard of the expression “less is more.”

By the third fight, I grew tired of it. As brilliantly choreographed as much of this is, it grows redundant and mindless to watch. While “John Wick: Chapter Two” was also wall-to-wall with amazing (and incredibly brutal) action, it had a story and a handful of supporting characters who added flavor to the bloodshed. Here, a few of the side roles provide color but most of the villains are interchangeable. The third “John Wick” is comparable to the trajectory of Reeves’ own “Matrix” sequels: what began as simple and mysterious has become murky and oversized. The more I learned about this underground world of assassins and their dependency on coins, the less intrigued I was. Establishing the specifics of how this world operates is more information than the audience needs. I hope to never hear the words “High Table” again and find the excessive use of coins (gold and otherwise) intriguing but silly in a pirate movie sort of way. On the other hand, Wick murders an opponent in one sequence using a library book; that bit left me extremely satisfied, and really grateful for our public library system (those heavy volumes clearly come in handy!)

Reeves is impressive, especially considering he made this at the age of 52. He pulls off some amazing, Tom Cruise-worthy stunts and fight scenes that are among the most accomplished of his career. Playing the most intriguing of the villains is Mark Dacascos, who hasn’t been seen in a major Hollywood film since his breakout in the Capoeira-infused, teacher-in-the-hood cult classic “Only The Strong.” Dacascos is wonderful here; I hope it leads to a further career renaissance. . Likewise, Halle Berry, playing Wick’s only friend, hasn’t had a role this good in a movie this solid in forever. The cast is well chosen, though the real stars are the stunt performers who persuasively appear to be mangled and slaughtered by Reeves.

You won’t get any spoilers from me but the open-ended, sequel teasing final scene is a letdown. Rather than draw this out into a never-ending franchise, I hoped the filmmakers would provide a proper conclusion. Not only does suggesting more to come feel like a cheat but it also begs the question- how much more can they squeeze franchise provide, in terms of action and surprise?

John Woo’s 1992 “Hard Boiled” is still the best of this kind of movie, in which the violence is so remarkable,  exciting but extreme, you feel a conflicted about enjoying it so much. I couldn’t get enough of “Chapter Two” but with “Parabellum,” I cried uncle early into the first hour.

'John Wick: Chapter 3' has no comments