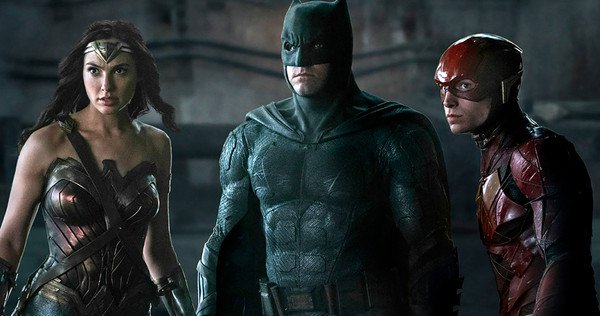 The Super Bowl of comic book movies for the DC Comics universe has finally arrived and it’s a major bust. Years of laying down the narrative ground work, establishing the classic comic book characters in their film forms and finding a way to wrap them all together in one big cinematic tamale has led to an event that isn’t so special, after all.

At the start of “Justice League,” Superman is dead and Bruce Wayne (played by a tired-looking Ben Affleck) searches the globe to put together a money making franchise for Warner Brothers- I mean, a team. Having already recruited Wonder Woman (the effervescent and better-than-this-movie-deserves Gal Gadot), Wayne tracks down Arthur Curry/Aquaman (an ill-used Jason Mamoa) and Barry Allen/ The Flash (played by Ezra Miller, in an apparent effort to be as irritating as Jesse Eisenberg’s Lex Luthor). There’s also Victor Stone/Cyborg (played by a charisma-free Ray Fisher) and the appearance of a monster named Steppenwolf who, strangely enough, isn’t introduced to “Born to Be Wild” playing on the soundtrack.

The pacing and momentum are off from the very beginning, as the editing suggests, at best, we’re watching a work in progress. Consider how tight, propulsive and complete the best of this genre offers and compare it to how little flow this has. Every cut to another character feels like a channel has been changed abruptly to yet another lousy movie. The blame can be shared by original writer/director Zac Snyder, as well as the unbilled second writer/director Joss Whedon. There’s also the slew of writers and producers attached, who took a sure thing and mishandled it.

Despite how good the actors appear posing alongside one another, none of them have any chemistry with their teammates. The camaraderie between each of The Expendables is like a raging bro-mance in comparison. Affleck was exceptional before as Wayne but seems unengaged here. Mamoa’s lively Aquaman appears on loan from a far more interesting movie and it’s easy to forget that Amy Adams, J.K. Simmons and Diane Lane are even in this. This is easily Gadot’s movie, if only because it’s such a flimsy vehicle to steal.

Steppenwolf is a terrible villain, easily one of the lousiest bad guys to wreck havoc since Sharon Stone in “Catwoman.” The CGI baddie is voiced indifferently by Ciaran Hinds and wears a helmut even sillier than the one David Thewlis brandished in “Wonder Woman.” Why did the makers of this movie, presumably the BIGGEST DC Comics installment yet, think to center the plot around this loser and not one of their big league evil doers, like Darkseid or Braniac? Heck, even the goofy but always riveting Mr. Mxyzptlk would have been preferable. While I’m waving my Nerd Card out in the open, here’s another question for the filmmakers: have they read what happens after the 1992 best-selling “The Death of Superman”? On the written page, Superman’s resurrection came after confronting Jonathan Kent in the afterlife and reappearing on Earth in different forms, ranging from Steel to Superboy. It was an arresting and very strange way to reinvent the character. In this movie, the dopy “Mother Boxes” McGuffin is relied on to do too much narrative heavy lifting.

Loose ends, pointless bits, ill-timed sequences and scenes cut too short litter the oddly too-brief 120- minute running time. After an early, useless found footage interview with Superman, Snyder indulges in his staple of a slow motion music montage for the opening credits. It worked great for his “Watchmen” but falls flat here.  Subplots about a Russian family and the state of Martha Kent’s real estate dealings (?!) are especially why-are-we-watching-this baffling.

The Wonder Woman portions work best, while the chatty Superman bits are especially lackluster. “Justice League” isn’t a disaster like “Suicide Squad” but isn’t better than “Batman V. Superman: Dawn of Justice,” which at least had a first rate Affleck turn and a climactic tussle that was suitably earth shaking. Here, someone powerful knocks a superhero into a wall, leaving an impression of rubble and cracked cement, until the fallen hero gets up and it happens again, and again. We have a year before the Mamoa-starring, James Wan-directed “Aquaman.” I hope it’s not as poorly constructed and painfully corny as “Justice League.”

'Justice League' has no comments