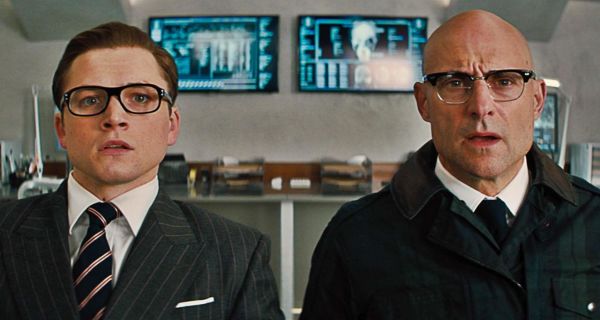 Matthew Vaughn’s “Kingsman: The Golden Circle” is a special kind of terrible, the sort of bad movie you watch with your jaw agape as your brain melts out of your ears. If that sounds painful, just try sitting through this 141-minute endurance test.

Taron Egerton returns as Eggsy, the streetwise teen-turned-super-spy who works for Kingsman, a spy organization with a tailored suits storefront. When an evil super-villain named Poppy (played by Julianne Moore) takes down most of the Kingsman organization, Eggsy turns to those he trusts: sideman Merlin (played by Mark Strong) and his thought-to-be-dead mentor Harry Hart (played by Colin Firth).

The last time a rotten comic book movie spun off a far-worse, trying-too-hard sequel, it was “Kick-Ass 2.” This is a more polished work but every bit as nonsensical and irritating.

The signature scene of the prior film is the climactic, mass-head explosions. Eggsy references it here, calling it “spectacular.” Nothing in the sequel  is as outrageous, though Vaughn certainly tries. Early on, Eggsy jumps into a rancid river of fecal matter. There’s also a gross bit involving cannibalism and another scene that may contain the mother of all crotch shots. Of the latter, there’s no need to fret: misogyny isn’t singled out.  No, “Kingsman: The Golden Circle” also hates Americans, cowboys, US capitalism and cheeseburgers. If any of this played like an episode of “South Park” or a great “Austin Powers” sequel, Vaughn would really have had something. Instead, his “extreme” take on 007 stumbles.

I admire Moore’s commitment to the barely contained craziness of her role. This is as close as she’s ever come to playing Hannibal Lecter and the chipper madness she conveys should make Sir Anthony Hopkins proud. Still, seeing her in a movie this bad is disheartening. Likewise, Firth, Channing Tatum,  Emily Watson (!), Halle Berry and Jeff Bridges, who is still on auto-pilot, playing either Rooster Cogburn or The Dude in every movie he’s starred in since 2010.

There are disparate elements here that could have worked in a good movie. I liked the robot dogs and there was potential in the political cartoon-like handling of putting virus-infected Americans in stacks of cages. An action set piece on a snowy mountain top is well done and the film’s best. The auto smash-up opener, on the other hand, gets things off to a weak start and elicits what little excitement it can from using a vintage Prince tune.

Conversely, the scenes set in “Poppyland” are garish camp that no movie could survive. It’s one thing to satirize Americana and our predilection for junk food and nostalgia, Yet, combining those as the basis for Poppy’s jungle hideout is ridiculous, even for a comic book movie. All bad movies have irredeemable moments and this one has fat stacks to choose from. Elton John fans may forgive his gratuitous cameo appearance but Mark Strong’s penultimate tribute to John Denver is embarrassing. .

While “The Golden Circle” is more sentimental than the original, the touchy-feely moments feel mawkish and out of place next to scenes of “hip” ultra-violence. Vaugn utilizes so much profanity, obvious CGI, and an exorbitant amount of attitude, it’s like he was trying to make a bad Guy Ritchie movie. Such is the caliber of the screenplay (written by Vaughn and partner-in-crime Jane Goldman) that I actually missed Samuel L. Jackson’s grating, lisping villain from the last installment.

An attempt is made to focus on a romantic subplot for Eggsy but a big meet-the-parents scene is oddly cut short, A recurring visual of butterflies appearing in Hart’s perspective is initially stunning, until it becomes tired and overdone, like everything else here.

I have to give Vaughn proper credit for one thing:  setting an overdone, late-in-the-movie, diner punch-out to Cameo’s “Word Up” is a fine way to torture this movie critic. Well done, Matthew Vaughn.

'Kingsman: The Golden Circle' has no comments