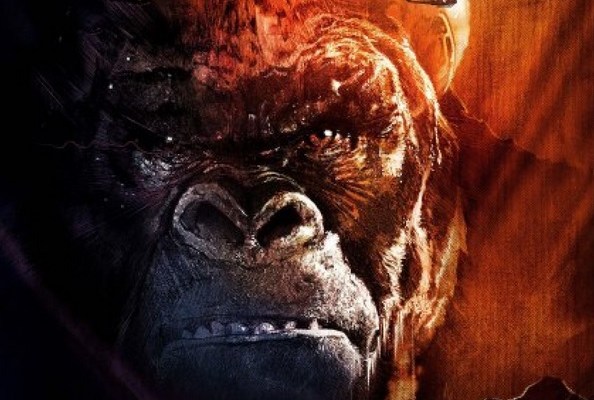 Every version of the King Kong story is essentially the same but each has a different idea driving its story. The original, 1933, black and white King Kong is one of the greatest movies ever made, the prototype for every subsequent special effects-driven blockbuster and visible proof that a man-made movie monster can be endearing and believable. The stop-motion effects in the first movie are creaky but still adorable and impressive for their ambition. Best of all, you root for the Big Guy and understand all too well why he adores screen goddess Fay Wray (c’mon, Kong is a romantic–why else would he take the love of his life to the top of the Empire State Building?).

My first introduction to the immortal character came in the form of the Dino De Laurentis-produced 1976 version. Despite its epic ambitions, an updated story and a cast that included Jeff Bridges, Jessica Lange and Charles Grodin, the award-winning visual effects have aged horribly. Despite how striking it is to see Kong climb the World Trade Center’s twin towers and flirt openly with Lange (who, at one point, asks Kong for his astrological sign), the film is a dud. Peter Jackson’s 2005 remake brought the character back to its former elegance and old school Hollywood glamour. But it takes too long to get started and Adrien Brody and Jack Black will never be plausible action stars. Still, the heart and excitement of the Beauty and the Beast re-telling were there.

Director Jordan Vogt-Roberts surprises with his Kong: Skull Island by setting the story in 1973. The 1933 film is about finding hope and wonder amidst The Great Depression, the ’76 version is a commentary on corporate greed and the ’05 remake is a tribute to classic Hollywood through digital wizardry. King Kong 2017 is, believe it or not, an on-the-nose allegory about the Vietnam War.

Samuel L. Jackson stars as a decorated war hero who just survived a tour with his soldiers through Vietnam. Rather than returning stateside, he agrees to one last stint: a couple of scientists (played by John Goodman and Corey Hawkins from Straight Outta Compton) require military protection as they explore Skull Island, with weather patterns not unlike the Bermuda Triangle. Once the large crew (which includes Brie Larson, playing a photographer) infiltrates the violent weather, they quickly find that the island is inhabited by giant monsters.

Every one of these movies stumble out of the starting gate, with too much exposition and set-up for the human characters. Vogt-Roberts’ film moves swifter and has a tighter pace than Jackson’s, though his approach overall is to mimic the look of graphic novels. This is often effective, as the filmmaker knows to take a pause during a striking, iconic moment. Yet the style leans more towards Zac Snyder than Peter Jackson and so does the screenplay.

The dialogue and plotting are B-movie top to bottom, as the actors are stuck reciting brief sentences that were designed for movie trailers and little else. Tom Hiddleston is the dashing lead but the movie clearly needs him more than he needs it. The same is even more true of Larson, who has less to do here than Fay Wray, Jessica Lange and Naomi Watts ever did. Larson’s role should have been played by Megan Fox, not the Oscar winning star of Room. Even John Goodman seems tripped up by his dumb lines. Thankfully, Jackson isn’t above giving a full-on self parody and gnashing his teeth like a true pro. Then there’s John C. Reilly, stealing the movie by doing a take on Dennis Hopper’s Apocalypse Now role. Reilly is clearly improvising like mad but he still gives a solid, poignant turn.

There have been better, smarter versions of this story but I’m still in love with any movie where Reilly brandishes a sword and slashes away at monsters. Kong: Skull Island delivers where it counts and offers a generous helping of monster movie thrills. Anyone who grew up with Rodan, King Kong Vs. Godzilla or Godzilla 1985 will eat this up. Just make sure you sit through all of the end credits for the full effect. The creatures are the real star and they are jaw-dropping. Even in a film where Samuel L. Jackson reprises his most famous Jurassic Park line, the biggest movie star here is the one who can punch-out a helicopter.

'Kong: Skull Island' has no comments