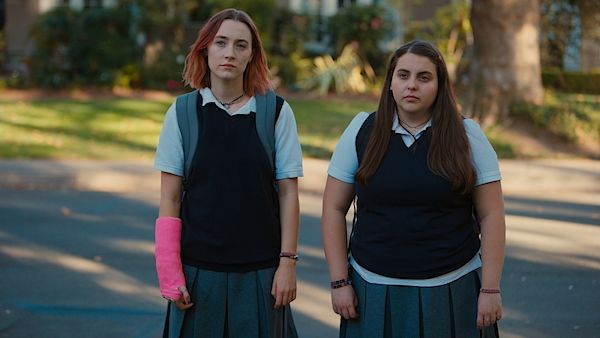 The lists of the best high school movies seem to always start with John Hughes’ “The Breakfast Club” or “Sixteen Candles.” As much as I enjoy Hughes’ works and the genre in general, the finest movies about high school are directed by women. Why? Because there’s a needed balance in their depiction of adolescent sexism, the battle to either overcome or embrace the labels of peers and that time when everything either is either sublime or a complete mess. Male directors historically tend to focus on those who are Hot or Not, play up the stereotypes and celebrate the prom or big football game as a rite of passage (spoiler: they never are). Female directors look beneath the facade of our teen years and depict the hilarious, painfully embarrassing truth. Great high school movies made by women include “Fast Times at Ridgemont High,” “Valley Girl” and now, “Lady Bird.”

Greta Gerwig’s  film focuses on a young American teen, played by Saoirse Ronan, who goes by the name of “Lady Bird” McPherson, whose name, hairstyle and attitude suggest a rebellious streak that is both a shield and an effort to understand who she is. Lady Bird’s mother (played by Laurie Metcalf) struggles to understand her defiant ways, while her friends are either taken in or frustrated by her. Lady Bird’s teenage journey is marked not only by self discovery but also a religious education she both accepts and pushes against.

I was initially resistant to Gerwig’s directorial debut. The early scenes felt overly familiar, the dialog too mannered and it looked like the kind of self consciously hip, 90’s-era comedy that touted indie cred despite a recognizable cast. Its private, religious school setting, irreverent dialog and rebellious teens seemed to suggest Gerwig had really liked “Saved!” a lot.

“Lady Bird” is broken up into extended segments, portraying the title character’s relationships with her misfit best friend, a new boyfriend, the pretty and popular girl who becomes her ally and daily verbal combat with her family. The episodic structure works and, most importantly, I grew to love the characters, particularly Lady Bird.

Ronan has been a celebrated actress for years but her work in projects ranging from “Atonement,” “The Lovely Bones,” “City of Ember,” “Byzantium” and “The Host” has never captivated me. She always seemed so detached from the material, as though her icy demeanor was not just a character choice but a way of deflecting the material. This is the first time I lost myself to Ronan’s acting and found joy, not just in her character but in the nuances of her acting. Her performance is convincing, layered and vulnerable.

The supporting cast is solid from top to bottom, though special mention goes to Metcalf and especially playwright-turned-actor Tracy Letts as Lady Bird’s parents; both have beautifully played scenes in which we see the painful truths parents sometimes keep close to the vest. Lucas Hedges, who played a key role as Casey Affleck’s nephew in “Manchester by the Sea,” is especially wonderful playing Lady Bird’s first true love. They share a scene alone in which a hidden truth is shared between them; I saw the film some time ago but still get choked up thinking about that moment.

How much you enjoy “Lady Bird” depends on how much you like and relate to the characters. For some, Lady Bird may come across as too bratty and occasionally self destructive to care about and follow for the entire 94-minute running time. Not only did Gerwig’s protagonist (who she acknowledges is based on her) grow on me but I became swept up in her emotional peaks. There are powerful moments that sneak up on you and feel as honest and lived in as everything else here.

Gerwig has become an indie comedy staple, with her turns in films like “Greenburg,” “Frances Ha” and, my favorite, “Mistress America.” She’s a refreshing new presence as an actress and, in her debut behind the camera as the director and author, it appears she’s also the real deal as a filmmaker.  This is one of the funnier and smarter high school comedies in some time.