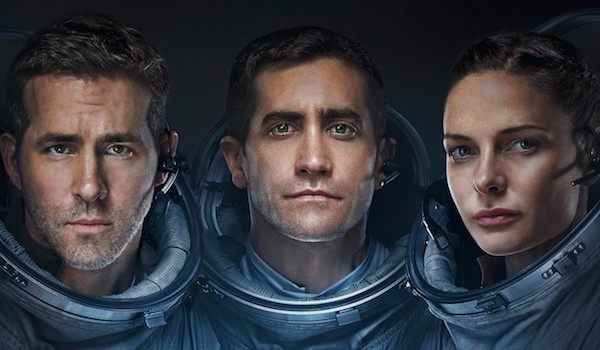 Daniel Espinosa’s “Life” begins as a serious minded, optimistic and thoughtful sci-fi tale on the weight of creating and nurturing life. We meet six astronauts (played by Ryan Reynolds, Rebecca Ferguson, Jake Gyllenhaal, Hiroyuki Sanada, Ariyon Bakare and Olga Dihovichnaya), living on the International Space Station, who have obtained a living organism from Mars. They call the organism “Calvin” and monitor its growth fondly and attentively, as it’s the first ever proof that life on the red planet exists.

After an upbeat, even joyous introduction, the movie takes a sharp turn towards horror and never looks back. Suddenly, “Life” sheds its skin as a drama and becomes a full blown, outer space creature feature.

Gylenhaal gives his role everything he’s got and Ferguson’s chilly charisma continues to pull me in. Reynolds is likable enough playing Van Wilder as an astronaut, though his snarky tongue in cheek bit is becoming overly familiar. Despite the strong work of the cast, the movie belongs to Calvin, a monster I grew to root for and whose evolving appearance and strength I loved. Seeing Calvin scurry across the outside of the spaceship, like a pesky vermin, is a striking visual. So is the moment when, intentionally or not, it sure looks like Calvin flips off the camera after dispatching another astronaut. There’s also the inevitable moment when the airlock opens and the cast must crawl slowly to safety. Seeing Calvin, with its tiny size and unique structure, doing the same painful crawl alongside its human co-stars, made me smile.

Were the cast all unknowns, we’d be rooting for Calvin, who is more a victim of circumstance and human stupidity than a villain. As is, the movie still belongs to Calvin, though this is partially the fault of limited screenwriting. Each of the astronauts are given a nugget of characterization (some have loved ones waiting on Earth, others not so much), but the humans are one-note. It’s easy to cheer on the monster when its behavior is based more on survival and self discovery than blood thirsty retaliation, though there’s a bit of that, too.

A great score by Jon Ekstrand adds to the excitement and, while not on par with “Gravity,” the special effects are mostly convincing and beautiful. Espinosa skillfully stages the opening scene, establishing the living and working quarters on the space station, in one take. This impressive sequence immerses the viewers into the setting and wastes no time in setting up the characters and ideas on hand.

Perhaps the most memorable scene in “Life” will prove to be the final one, a bold story twist that  honestly snuck up on me. Yet, for all the superb cinematic craftsmanship on display and some intense performances, this is the kind of movie where “Re-Animator” and Instagram are name-dropped by Reynolds in the same scene.

The title is an odd choice, as it was already used for a very-good 1999 Eddie Murphy/Martin Lawrence comedy. Using the word “life” in a title courts pretentiousness, though “Life Itself” and “Life is Beautiful” earn the use of the word by association of films having so much dramatic weight. This “Life” would have been better titled as “Death,” since this is little more than a souped-up monster on the loose thriller.

Still, it’s one of the best “Alien” rip-offs since “Leviathan” and far more fun. Espinosa’s film utilizes the narrative blueprint of Ridley Scott’s horror/sci-fi masterpiece, adds a dash of Scott’s existential drama “The Martian” and a fat helping of Scott’s slimy, why-are-we-here, brain tickling and slash-happy “Prometheus.” If you approach “Life” with B-movie expectations and feel like rooting for a really cool monster, it won’t cease to entertain. If you think Neil deGrasse Tyson won’t tear this movie apart as fast Calvin can munch human flesh, then stick with “Interstellar.”

'Life' has no comments