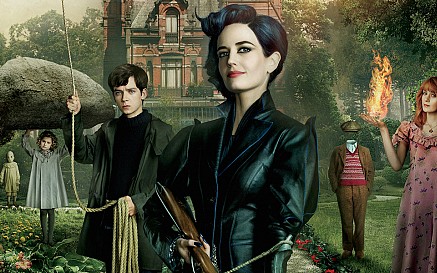 Jake Portman (Asa Butterfield) lives a humdrum life as an ordinary American teenager living in Florida. To others his age, he is practically invisible. The mysterious circumstances behind the recent passing of his eccentric grandfather, Abe (Terence Stamp), reveals a link to a group of individuals known to a slight few as peculiars. “Miss Peregrine’s Home for Peculiar Children” is Jake’s journey of self discovery. He’s helped along by the strict yet caring Alma LeFay Peregrine (Eva Green), the headmistress of a secret daycare for kids who would otherwise be out of place among other children their age.

It shares a familiarity with the Matthew Vaughn directed “X-Men: First Class.” Put simply, I now know what an X-Men movie directed by Tim Burton would be like. “Miss Peregrine’s Home for Peculiar Children” is every bit as quirky a film as you would expect from the famed director, but the shining moments don’t necessarily involve the children. Not really. I found those scenes belonging to Eva Green and Samuel L Jackson. Eva Green’s unblinking Miss Peregrine is equal parts mysterious and mesmerizing. Meanwhile Sam Jackson’s Mister Barron had me wondering if Tim Burton just told him to overact every scene he was in. It’s an interesting thing to watch the man pour it on whenever the camera is on him and the film is better for it in my opinion.

With such a gorgeous backdrop and such a fitting director, you would think that the entire movie would be a macabre home run, but instead it’s very hit or miss. Even a cameo appearance from Dame Judi Dench as Miss Avocet, doesn’t help if you aren’t into the disjointed plot from the beginning and the slow start doesn’t help much either. One would think the children to be the main draw here, but most of their performances are rather forgettable which is a shame. I really wanted to get to know about the different characters and the abilities of the different peculiars. This time around, the focus is mainly on Emma Bloom (Ella Purnell) and Enoch O’Connor (Finlay MacMillan) for their ties to Jake and his grandfather.

I found most of the experience to be enjoyable and in the end that’s what really matters the most. In an age where superhero films are topping box office sales, Burton’s style and attention to detail is welcomed. In fact, I feel he truly does excel here. It’s a creative (and other than the slow start) and fun introduction into this world.

'Miss Peregrine’s Home…' has no comments