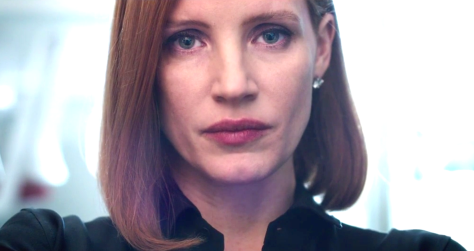 The opening shot of “Miss Sloane” is an extreme close-up of its star, Jessica Chastain. Playing the title role, Chastain explains to the camera the definition of what a Lobbyist is and how far her character is willing to go to succeed at her profession. We quickly learn that Chastain’s Elizabeth Sloane is about to testify before a senator (John Lithgow) over her questionable behavior as a gun lobbyist. Her lawyer is visibly nervous, pleading with her to answer every question by pleading the fifth.

The story jumps back in time and shows us Sloane at her profession, before her principles are scrutinized. We witness a pattern in Sloane’s method: she verbally terrorizes everyone around her, tests the loyalty of those working for her and creates elaborate ruses to fish out disloyal colleagues.

Director John Madden’s career has been in a strange limbo since helming the 1998 Best Picture winner, “Shakespeare in Love.” Since then, he’s made lots of prestigious-looking stinkers like “Captain Corelli’s Mandolin” and “Killshot” and made audiences suffer through two “Best Exotic Marigold Hotel” movies. His latest is never dull but undeserving of a 132 minute running time. Madden directs this with snap but it goes on forever.

As movie characters go, Elizabeth Sloane is far less likable than Hannibal Lecter. In fact, if I had to choose between getting stuck in an elevator with Darth Vader or Miss Sloane, I’d take my chances with the Sith lord. Chastain’s ferocious performance is something to see but it’s also her most mannered. Chastain has been brilliant before, portraying women with a seething inner fire (note her great work in “Zero Dark Thirty” and “A Most Violent Year”). She gives Sloane everything she’s got but her intense work sometimes feels like grandstanding. Yet, considering how nothing in this movie is ever remotely subtle, Chastain’s decision to play Sloane in a very big way is fitting.

Neither the screenplay nor Chastain ever lets us inside Sloane’s interior, keeping the audience at the same distance as those in Sloane’s workspace. The character is thoroughly repellent but Chastain makes her fascinating. A bigger problem is how contrived the story is. By the second act, the movie lost me with its too-on-the-nose melodrama and some absurd touches.

The music by Max Richter is superb, and everyone in the ensemble cast is first rate. In addition to the always-welcome Lithgow, there’s excellent work from Michael Stuhlbarg, Mark Strong (in a rare, villainy-free turn), Gugu Mbatha-Raw and Dylan Baker. One sequence, in which Sloane outs a traitor in front of her colleagues, is a dramatic knockout.

There’s also a subplot with Jake Lacey (from “The Office”) playing a male prostitute, the presence of a robo-roach (you read that right) and a cool analogy involving a blowfish. It’s that kind of a movie.

“Miss Sloane” builds to a climax so over-the-top, it’s both awesome and completely ridiculous. What transpires would make even Perry Mason slap his forehead and wonder aloud, “are you kidding me?” It’s at this point where “Miss Sloane” becomes an unintentional parody of itself. This is the kind of movie that’s compelling while it plays but preposterous upon reflection.

Some good topics arise on matters of ethics but this isn’t a stellar probe of the political process. It pales next to “Equity,” the Anna Gunn-starring drama from earlier this year that was mercifully shorter, and offered a far more compelling depiction of feminine empowerment in a man’s world.

With its multiple conclusions and inability to settle on a final scene, I developed an irrational fear that “Miss Sloane” would never end. Sitting through this movie is like binge watching an entire season of a political drama you’ll never want to watch again.

'Miss Sloane' has no comments