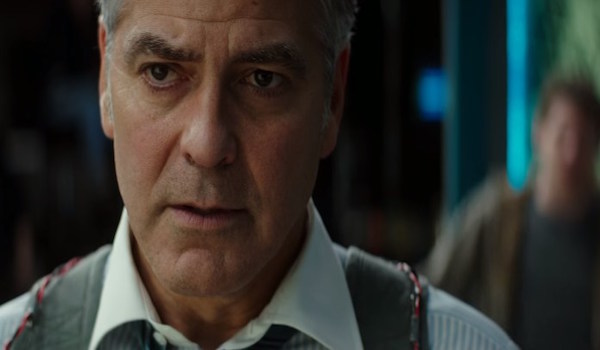 Jodie Foster, the director of Money Monster, is a very talented actress and director. Money Monster marks her first feature film as a director in 5 years. She has assembled an impressive cast lead by George Clooney and Julia Roberts. Money Monster has also been given the coveted release window of Summer. The question now becomes, can Jodie Foster deliver a film fitting for a Summer movie crowd?

Money Monster is an odd film for Summer movie fare. The subject matter of finance, the stock market and Wall Street doesn’t exactly scream movie excitement. Going into this movie their was some trepidation as to what I’d be in for. What I was given was a mixed bag of good ideas, bad execution, and ill timed humor. George Clooney stars as Lee Gates, a financial TV wiz, fashioned after glamorous stock market TV hosts like Jim Cramer. He’s all sass, extremely brash and quite wealthy. He’s paired with Patty Fenn, his longtime director. She’s his polar opposite, but willing to tell Gates what’s on her mind. On a typical shoot for Gates’s stock market tips TV show, Money Monster; Gates, Fenn and the rest of the crew don’t realize that a disgruntled investor disguised as a deliveryman has a grievance against Gates and is prepared to carry out a dangerous plan that could get all of them killed if Gates can’t answer the question as to why his $60,000 investment in an attractive stock has disappeared into thin air.

Money Monster is a 90 minute suspense thriller that cuts the fluff and gets to the meat of the story. The problem is the film has a strong premise, but unfortunately is just too Hollywood for its own good. Situations in this film are tidied up too nicely. It tries to deliver its message with a sledgehammer and becomes off putting. The character of Kyle Budwell (played by Jack O’Connell), the man who lost his money in the market, is never one you could empathize with because of the actions he takes to get his answers. He also is a man that you realize never did any research before investing and just took the word of some cable TV host and takes no responsibility for the part he played in his own decision making. What is really sad is he’s supposed to be portrayed as a naive working man struggling to get by. Instead he resembles a moron who can’t keep his life together and looking for the next get rich quick scheme. I empathized more with his girlfriend’s struggle with him than his own. What I found the most insulting is that I think that this is how Hollywood looks at the average American, a half wit who is taken advantage of by wealthy cretins and can’t think further than arms length and needs someone else to blame for their troubles.
The movie can be thrilling and suspenseful at times, but you never feel as if any of our main characters are in any real peril. Clooney and Roberts are great and O’Connell was just an annoyance throughout. The villain of the piece, Walt Camby (played by Dominic West) is nowhere near nuanced. The fact that he’s referred to as a villain should be an indicator as to his cartoonish performance. It’s disappointing that the writer and the director were pushing some kind of agenda of how Wall Street is bad and we are good, but we’re all too stupid to understand the stock market. If the filmmakers had tried to craft a movie with just a bit more substance and a little less preaching I think this movie would’ve been much better. What we get here is great performances by our leads, a few suspenseful scenes, and an all too easily resolved story. There is a great quote said by Michael Corleone in a deleted scene from the Godfather Part II that I believe applies here: “This contempt of money is a trick of the rich to keep the poor without it.” I believe that in this digital age that sirens call has just kept getting louder. Films like Money Monster keep pushing this button of contempt for cash and some in America are starting to buy it. It’s sad that the value of striving to become wealthy has been lost and instead we want to demonize all that hold wealth as ill gotten gains. While Clooney and actors of his ilk keep raking in your cash without a care in the world. I’m guessing they do movies like this to appease their guilt and then sip Mai Tai’s on their yachts in the Bahamas. Unfortunately, this film is more “Money Mite” than “Money Monster.”

Two and a Half Stars Out of Five

'Money Monster' has no comments