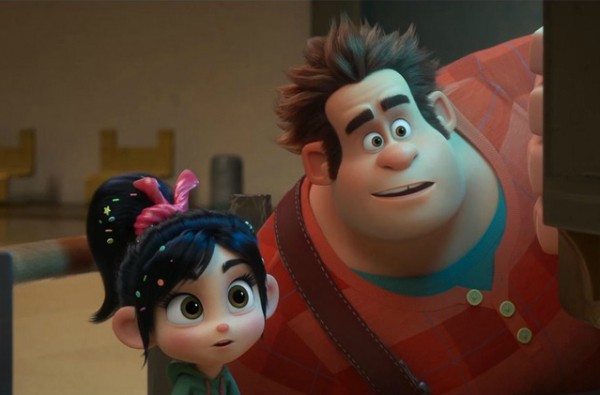 At the beginning of “Ralph Breaks The Internet,” the lovable doofus “Wreck It” Ralph (voiced by John C. Reilly) and tiny, sugary-voiced Vanellope (voice by Sarah Silverman) are still best friends and enjoying the simplicity of their lives as video game characters. When the steering wheel attached to Vanellope’s “Sugar Rush” breaks, she and Ralph set off on a quest into the internet, in order to find a steering wheel replacement, in a land called ebay.

There are moments of true genius within “Ralph Breaks The Internet” but it also left me unsatisfied and cross-eyed from the endless parade of product placements and shameless in-movie commercialism. I had fun watching this, even as I sensed this is more a product than a story that earns the emotional uplift at the end. It’s one thing to set a movie in the world wide web and tease how the system works but this is less a web send-up and more like a lavish Super Bowl ad.

In many ways, this represents everything that’s troubling about the Disney domination of pop culture. Seeing a movie like this, with countless product placements, endless lists of iconic characters who make pop up cameos and giant franchises existing in the same space, is a numbing, deadening experience. If a Storm Trooper and Snow White can exist in the same space, then why is either story valid or special? More to the point, the uniqueness and distinct qualities of an individual narrative is tossed aside so fans can quickly glimpse a favorite character, who says a few lines, then vanishes. Sick, dude! Actually, it isn’t.

“Ready Player One” proved this at the top of 2018- if you have a tossed out cameo appearance by, say, Chucky the Killer Doll, who shows up in one quick moment, then vanishes, it cheapens the character, who deserves his own movie. I know Marvel is on a roll but universe building isn’t necessary for every franchise, let alone every film studio. “Ralph Breaks the Internet” suggests that EVERYTHING Disney owns lives in a shared universe. Somebody please stop this trend before the next sequel takes place at a library, with the March Sisters, Lolita, Katniss Everdeen and Hermoine race one another in go carts.

This is supposed to play as satire but it could only work that way if this was made by a rival studio; watching a Disney movie kinda tease their collection of iconic princesses isn’t comedy, its strategic back patting. So are the internet gags, which are obvious and limited. Is this movie intended to instruct children how the internet works? At best, this is superior to the moronic “The Emoji Movie.” However, while there are lots of visualizations for things like pop up ads and online bidding, it shies away from adding dramatic gravity to the setting like the “Tron” films do.

Consider again the highly touted Disney princess sequence, in which every character defined by that term appears in a get-together to give Vanellope some advice. Moana is among the guests and is, once again, voiced by Auli’i Cravalho. This should be a big deal. It isn’t, as Cravalho has barely any lines and everything that makes Moana a potent character is absent from the scene. The same can be said of Ariel, Elsa and all the rest.

“Ralph Breaks The Internet” gets truly weird at the end, with creepy imagery that made small children sitting around me cry aloud during the screening. The last scene is so very is-that-all-there-is, I was grateful for the amusing scenes hidden within the end credits. In the end, despite raising potentially interesting  ideas, it feels like no real points have been made. Bringing up very adult concepts like “dark web” and the cruelty visible in comments sections should result in moral commentary but these issues are tossed aside as quickly as they appear.

When the movie takes a break from name-dropping companies and products, in order  to build a story and character development, there are some fine moments. The extended sequence inside a “Grand Theft Auto”-like game is wonderful. So is the out-of-nowhere music number that plays like cracked brilliance (it’s the lone goof on Disney convention that lands). Best of all is the chemistry between Reilly and Silverman, which is rich enough to sustain our investment in these characters. When the movie is presenting existentialist questions about what it means to be happy and what makes a great friend, it works. When it piles on the product placement, “Ralph Breaks The Internet” is like being locked in a Disney Store.

'Ralph Breaks The Internet' has no comments