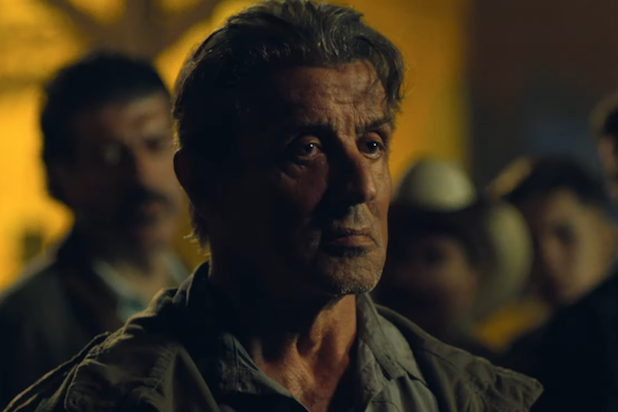 After John Rambo (played by Sylvester Stallone) saved a group of missionaries and murdered most of the bad guys in Burma, he settled down, found a home with a mailbox bearing his last name and embraced normal life. At least, that was the conclusion of “Rambo,” the 2008 installment which belatedly caught us up with the creaky, ultra-violent franchise. Now, after years of laying low and embracing sort-of living a normal life, we learn that Rambo is  living on a ranch, rides horses and, most shockingly, has given himself a haircut (at least, I assume he did it himself- it can be presumed a barber would be dead after putting a blade anywhere near John Rambo). He also sports a cowboy hat and now resembles The Marlboro Man.

A detail I love: Rambo has dug a massive tunnel beneath his home. It’s so big, it could likely fit a subway station. While this subplot is ludicrous, I’d be willing to watch a prequel where we just see Rambo shoveling dirt, singing, “Old McRambo Had a Farm, E-I-E-I-O.”

After the young woman he helped raised (played endearingly by Yvette Monreal) has ignored his warnings and gone off to Mexico to visit her no-good biological father, Rambo sets off to rescue her…and murder every single tough guy who gets in his way.

Although the story is quite predictable, especially in the set-up, it’s well crafted and performed with conviction. As simple as they are, the Rambo-on-the-ranch character-building scenes are strong at establishing how this beefy hero has managed to (mostly) drown out his killer impulses. Most will peg this as Stallone’s bent on “Taken,” but this is actually closer to the kind of movie Charles Bronson would have made thirty years ago (and, thirty years before that, John Wayne).

Pre-release reports that the film is pro- Trump’s Mexican border wall are wrong. The character of Rambo has been politicized before, onscreen and off (after all, President Reagan name-dropped the 1985 sequel in a speech). However, this isn’t a political movie but a revenge tale and, arguably, a neo-western. Co-screenwriter Stallone doesn’t paint any of these characters in shades of grey (except for Rambo, whose mental decline is mostly ignored but at least referenced in the first half). Here, there are Good Guys and Bad Guys, nothing more.

The  action choreography has none of the elegance or precision found in the “John Wick” movies but this is still better and nastier than  the “Taken” trilogy, with their PG-13 timidity and forced sentimentality. The fifth Rambo is certainly manipulative and sleazy but it’s also, like its namesake, lean, no-nonsense and brutal. Its often exciting and extremely effective at being exactly what it is: a Rambo movie.

On the negative end, there’s far too much CGI, which is fine when we’re talking about blood (blood pack squibs are out, digital blood is all the rage) but phony-looking fire is too much to swallow. Most of the crucial side characters are poorly utilized and the concluding scenes are howlers. About the latter touch- the end credits features scenes from the entire franchise, set to somber music. Watching the younger Rambo get his face sliced, blow stuff up and outrun a fireball, in clips lovingly rendered into slow motion, is one of the funniest things I’ve seen all year. I appreciate that Stallone is capping this as the last chapter but I have a suspicion he’s unaware how hilarious the last ten minutes of his movie is.

Yet, in addition to being an enjoyable revenge tale, there is a major feat that shouldn’t go unmentioned: at 73-years old, Stallone is still entirely convincing, capable and forceful in this role. As ridiculous and mind-bogglingly violent as this is, Stallone gives this a gravity and credibility that few action movie stars could. While I’m unsure if I’d like to see Keanu Reeves play Wick at age 73-years old, there’s something to be said for Stallone capping one of his most iconic and controversial characters with such a blunt vehicle.

While the title provides a proper franchise bookend, I’d prefer to call it “The Rocky Gory Picture Show.”

'Rambo: Last Blood' has no comments