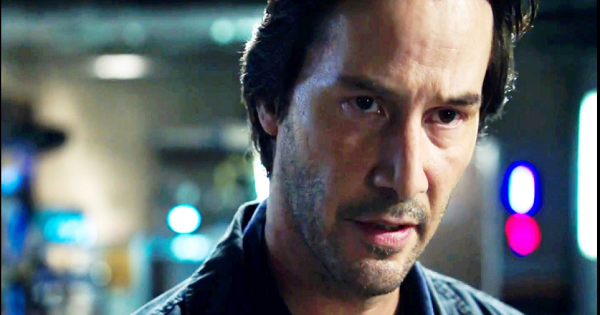 In the near future, scientist Will Foster (played by Keanu Reeves) moves the fading consciousness of a recently deceased man into a robot. When the robot “reawakens” as a skeletal machine with a metallic body, it immediately freaks out and rips its head apart. Clearly, Foster has never seen “RoboCop” and lacks the bedside manner to calm a recently born android. The disturbing opening scene of “Replicas” suggests a connection to Isaac Asimov’s “Law of Robotics” and effectively borrows some visuals from “Minority Report” and “I, Robot.” What follows isn’t nearly as good, as “Replicas” peaks very early.

Later that day, Foster has a conversation with his wife (played by Alice Eve) regarding compassion for human life and whether it’s wise to challenge the limits of science. It feels like an extremely blatant bit of foreshadowing, making the tragedy that occurs just minutes later seem comical, were it not so unpleasant. From there, the movie plays with the ethics of robotics, cloning and grave robbing.

“Replicas” offers a clumsy rendering of a promising set-up and a waste of some intriguing ideas. The good news is that, at times, it almost works and manages to maintain interest. Most of the film takes place in a single setting, with a race-the-clock angle that manages to generate some suspense.

Reeves is an actor I like, whose range and success as an actor has always been debated. With the right role and director (namely in Sam Raimi’s “The Gift,” Taylor Hackford’s “The Devil’s Advocate,” Gus Van Sant’s “My Own Private Idaho” and Nancy Meyers’ “Something’s Gotta Give,”), he’s terrific. When the casting is wrong or the film itself doesn’t work, Reeves sinks with the ship. His success with sci-fi has some very big peaks (“The Matrix” and “A Sacnner Darkly”) and valleys (“Johnny Mnemonic” and “The Day The Earth Stood Still”).

Reeves’ performance here is a work in progress, as he occasionally hits the notes the role requires but mostly fumbles through the movie. In his defense, the role is impossible- he’s essentially playing Dr. Frankenstein, having to seem manic, desperate, insane, grieving and sympathetic, sometimes all at once. Daniel Day Lewis would have had a hard time with this part; Reeves is really trying but the role is out of his range and demands a much showier actor. Alice Eve (playing Reeve’s wife) and John Ortiz (as Reeves’ impatient boss) give their supporting turns some heft but they fall short of making their complicated roles entirely plausible.

Considering how little action is in this, I’m unsure of why director Jeffrey Nachmanoff (ambitious but in over his head) thought to cast Reeves in the first place. Not helping are frequently nonsensical touches and some truly laughable moments. Thomas Middleditch plays Ed, Will’s lab assistant; we never understand why on Earth Ed continues to put up with Will and remain a faithful assistant after his boss has clearly gone bananas. Scenes of Reeves clutching a stuffed unicorn for comfort (!) are as giggle-inducing as they read. So is the bonkers scene where Reeves hides in a Men’s Room stall and sticks a needle in his eye. Then there’s the double-twist ending, which is so crazy, I’m curious if this would have worked better as a comedy.

There are smart concepts here, like considering which memories to delete from a newly created clone. Making a low-key, idea-driven sci-fi, taking place mostly in a two-story house wasn’t a bad idea, but the execution is the problem. Despite good special effects and a willingness to take the premise in wild directions, this winds up a guilty pleasure, like “Skyline.” Is it a good movie? Absolutely not, but it has some good unintentional laughs and a go-for-broke confidence in its wacky screenplay that won me over.

'Replicas' has no comments