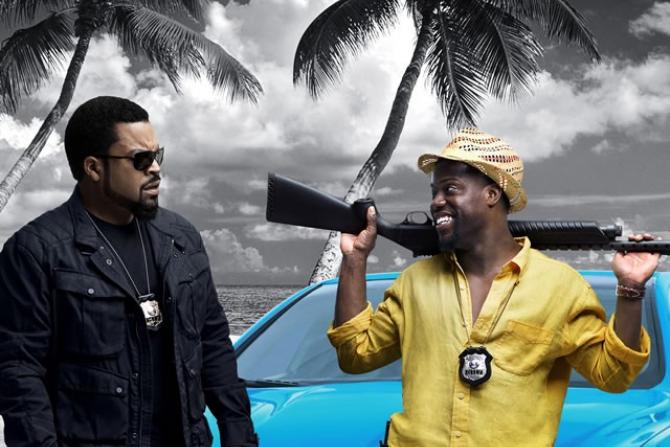 The best thing I can say about “Ride Along 2” is that it’s not as bad as the first one.

Despite the talents of Ice Cube and Kevin Hart, the first “Ride Along” was an absolute bore and yet it went on to become an inexplicable smash, so naturally a sequel was forthcoming. Following the sequel formula beat for beat, “Ride Along 2” is bigger, and admittedly a tiny bit better. Just a little. Very little.

Cube and Hart once again play cop brothers-in-law but this time, the action takes place in Miami and funny man Ken Jeong is thrown in the mix as a hacker who withholds some valuable information.

Hmm…a buddy cop movie starring two African American actors who run rampant across Miami? Why does that sound so familiar? Yes, “Ride Along 2” borrows bits and pieces from the much more superior “Bad Boys” franchise starring Will Smith and Martin Lawrence.

Think of it as “Bad Boys” lite. Actually, it’s more like zero calorie “Bad Boys.” It tries its best to be like the original, but it’s full of artificial components and the result is an obviously inferior wannabe product.

Kevin Hart is actually hilarious as a comedian, however, he has yet to demonstrate that he can fine tune his manic style for the big screen in a starring role. He’s much more effective in smaller doses like in “About Last Night” and the “Think Like a Man” films, but he’ll need to rein it in a bit when his name is above the credits. As for Cube, it wouldn’t hurt for him to just chill. He’s so serious and mean spirited that it makes it difficult to like his character at all. I thought Ken Jeong would bring some much needed hilarity and while he has his moments, I feel a lot of his good stuff ended up on the cutting room floor.

“Ride Along 2” is as generic a comedy you can get. Even as fan of buddy cop films, I was just able to tolerate it. Then again, I’m glad it wasn’t as bad as the first one.

'Ride Along 2' has no comments