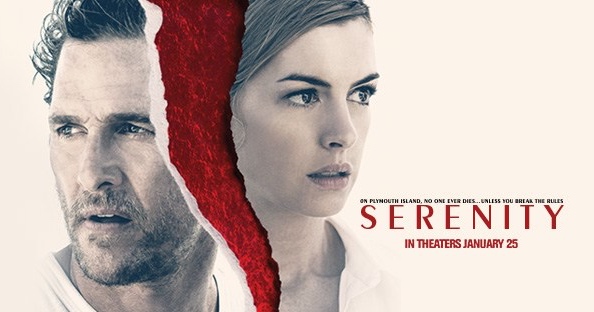 When we meet Baker Dill (played by Matthew McConaughey), he’s drenched in sweat, living alone in a dumpy apartment and lives to fish. Baker is particularly obsessed with catching a massive tuna he’s nicknamed “Justice,” a crazed fixation that has resulted in daily failed attempts to capture the fish with his patient first mate (played by Djimon Hounsou). Mounting debt and an unceasing yearning to wrangle “Justice” out of the depths have led Baker to prostitute himself with a local woman (played by Diane Lane). Adding further tension is the sudden reappearance of Baker’s ex (played by Anne Hathaway), whose abusive new husband (played by Jason Clarke) causes Baker to contemplate murder.

Everything I’ve just described occurs within the first 50 or so minutes of writer/director Steven Knight’s “Serenity” (the title is the name of Baker’s boat) and, in the early going, so far so good. I’m a sucker for neo-noir erotic thrillers and this one is rich with humid atmosphere and familiar tropes, like our unreliable protagonist, murky moral choices and the promise of everything being better, if someone commits just one little murder. For a stretch, this plays like the forgotten, Woody Harrelson-starring “Palmetto,” which was enjoyably pulpy trash. However, Knight has something bigger in mind and that’s where here this goes wrong.

I won’t reveal or hint at the what The Big Twist is, but will declare it as so truly bad, it will likely become legendary.

In the lead, McConaughey invests the same amount of intensity here that he has in far better roles, Still, the moments where he screams at the sky and growls, “I quit!” seem especially appropriate. McConaughey totally delivers every demand of his role, but the third act renders his hard working performance into camp. I haven’t seen the forthcoming “The Beach Bum,” so jury’s out if this is the actor’s worst movie.

Hathaway, who’s barely in this, plays her introductory scene like a femme fatale spoof (not a bad choice), then dials it back for the rest of the movie. She should have stayed in parody mode, as the increasingly grave tone of her work becomes comical for all the wrong reasons. Considering how subtle and soulful their shared scene work was in “Interstellar,” this is a step down for a McConaughery/Hathaway reunion (ditto McConaughey/Hounsou, reunited for the first time since “Amistad”). Lane’s role is especially thankless and degrading, while Clarke’s vile lout is so despicable, he’s downright funny. The cast will recover but what led them to sign on to this in the first place?

Knight’s prior work, the Tom-Hardy-in-a-car-for-the-whole-movie “Locke,” was inventive and especially well written. Here, Knight gives (of all things) the fishing scenes proper snap and bungles the rest. This is the kind of script that should have been used to wrap a dead fish and not made into a motion picture.

Back to that Big Twist, which is so stupid, a part of me remains impressed that the screenplay went all-in and committed to such a disastrous storyline in the first place. When all is said and done, there is nothing at stake on the surface level, while the full reveal proves to be distasteful, wrong-headed and tone deaf. “Serenity” is in the company of the recent “Life Itself,” “The Book of Henry,” “Transcendence” and “Remember Me,” all Bad Idea Hall of Famers.

The perspiration-drenched, sunny location makes this fun for a while and this is a beautifully shot and scored film. Some may defend this as a guilty pleasure (particularly fans of McConaughey, who has far more nude scenes in this than in “Magic Mike”) but I left the theater with a sour (perhaps a fishy?) taste in my mouth.

During the film’s workable early stretch, Knight openly foreshadows where he’s heading (heck, it’s in the very first image!); the none-too-subtle clues only made me think, “Oh no, please, don’t let that be what this movie is really about!”

One and a Half Star

'Serenity' has no comments