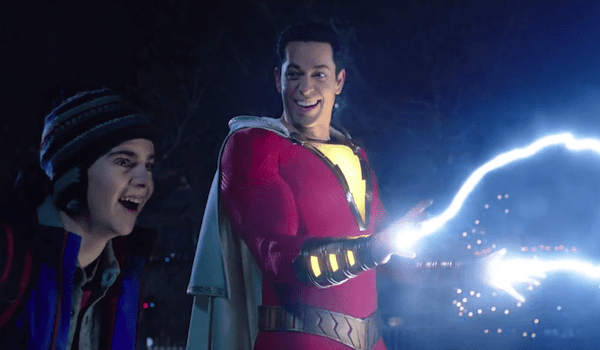 Billy Batson (played by Asher Angel) is a 14-year old who is presented with a last chance offer: after fleeing previous Foster homes and caught breaking the law, he has one final opportunity to live with a new family and re-direct his life. In addition to adapting to a brand new family unit, Billy must also deal with school bullies, a painful childhood and…randomly meeting a wizard, who grants him magical powers. All Billy has to do is declare, “Shazam!” and he transforms into a cape and tights-fitted grown-up, armed with an array of incredible abilities. Among them: impenetrable strength, flying and not getting kicked out of a “gentleman’s club.”

The early scenes of “Shazam!” are not promising and had me very worried I had walked into a turkey; one dour, unpleasant opening sequence follows another and the dialogue is sitcom-glib. Watching the gifted character actor Djimon Hounsou in yet another lame role (donning a giant Gandolf beard) makes me wish he were playing a superhero instead of spouting exposition for one of them. Mark Strong pops up, playing yet another villain; he’s very good here but has played this role, in exactly the same way, far too many times already (seriously, try to think of just one thing different about his work in “Sherlock Holmes,” “Robin Hood” and this).

While it takes a while to get to the good stuff (“Shazam!” is seriously overlong at 132 minutes), Zachary Levi, in the title role, swoops in and saves the movie. From his very first appearance, he energizes the fil,  winningly infusing it with goofy warmth.

A major misstep is that, while Angel and Levi are playing the same character, there’s no synergy to the performances. Unlike Tom Hanks playing Josh Baskin in “Big” (an obvious inspiration- note the piano!), Levi’s boisterous turn doesn’t really seem in line at all with Angel’s low watt characterization (also not helping is that, unfortunately, Angel is a weak actor). If anything, “It” scene stealer Jack Dylan Grazer is the best thing in this whenever Levi is off screen.

Like last year’s “The Predator,” there is a tonal imbalance that made me wonder just who this is for; while the marketing has this geared for kids, younger audiences will likely find this too scary, as the violence and monsters on screen are bloodless but intense. The last comic book movie to be this wobbly was “Venom.”

Yet, if “Shazam!” is unsteady in its rhythm, at least it brings a distinctly adventurous approach to the overcrowded superhero genre. Whereas the stodgy “Captain Marvel” brought little novelty, this takes its wacko premise pretty far. Levi is so funny and a handful of sight gags are so rich (namely the presence of a dog in one scene and an inopportune distance between the hero and villain during the climax), the comedy works by finding ways to alter expectations.

A subplot involving Billy’s mother is so malnourished, it seems like an afterthought. However, the way this movie portrays a Foster home and an environment of caring misfits in a positive light is refreshing. These kids and the couple raising them may be too good to be true but they grew on me. So did the movie overall, which improves greatly in the second act and never derails.

It’s impressive that this came from David S. Sandberg, the horror filmmaker who previously helmed “Annabelle Creation,” “Lights Out” and the original 2013 “Lights Out” short (which is still the scariest 3-minute film I’ve ever discovered on the internet). Sandberg has made tighter, more consistent films before, but here’s a comic book movie that aims to be different and succeeds. It’s actually better than “Spider-Man: Homecoming” and both “Kick-Ass” movies (all of which bear similarities) and has more heart than many of its ilk. “Shazam!” has enough ka-pow to leap over its imperfections.

'Shazam!' has no comments