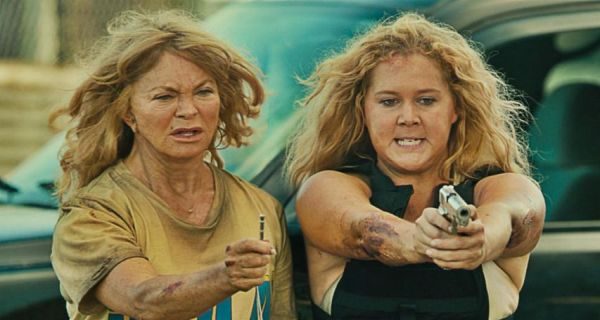 The premise of “Snatched,” the new Amy Schumer vehicle, is so unfit for a comedy, it’s amazing the scant laughs on hand are here at all.

Schumer stars as Emily, a spoiled, unpleasant, child-like party girl whose current boyfriend (Randall Park, in a funny cameo) is dumping her to become a sexed up rock star. Rather than refund her plane tickets and romantic getaway vacation to Ecuador, Emily talks her introverted mother (played by Goldie Hawn) into going with her. Not long after they arrive, they re kidnapped and held for ransom. Again, a fine premise for a thriller. Perhaps the filmmakers saw “Midnight Express,” “Brokedown Palace” or “Turistas” and decided those movies would have worked better with jokes. If that’s the case, this was doomed from the start.

Another major problem is that Schumer’s character is, to put it bluntly, really horrible. Unlike “Trainwreck,” in which her stand-up routine translated into a flawed but gradually endearing figure to care about, Schumer is grating and unlikable here. Hawn, in her first movie in fifteen years, is a ray of sunshine and still exudes sharp comic timing. It’s not that Schumer and Hawn don’t have any chemistry or garner a scattered laugh here and there. What’s disheartening is how Schumer and the screenplay are  dedicated to making Emily so loathsome, while Hawn’s character and ease at comedy deserve a far better movie.

In supporting turns, Ike Barinholtz’s dumb brother character is given far too much screen time and Joan Cusack is badly misused in a too-rare film appearance. Wanda Sykes is given a funny intro but her part never really builds but the funniest performer overall is, surprisingly, Christopher Meloni. In an extended cameo and a goof on Indiana Jones, everything about Meloni’s participation (even his jokey final moment) scores real laughs.

Screenwriter Katie Dippold, who also wrote the disappointing “Ghostbusters” remake, allows for edgy humor and some cracked supporting characters but the plot doesn’t work. There are moments of violence that, while inoffensive as far as current movie content goes, feel shockingly out of place and forced here. Because “Snatched” never decides if it wants to be a tough black comedy, a mother/daughter romp, a naughty sex comedy or a slapstick adventure, the bloodshed is just another unwelcome quality.

Director Jonathan Levine made the wonderful “50/50” and the surprisingly potent zombie comedy “Warm Bodies.” This is an odd and hopefully rare misstep for the promising new filmmaker.

“Trainwreck” was a strong vehicle for Schumer but this is a big step back. I’m glad she had fun making a movie with comedy legend Hawn but, between this and her underwhelming “Leather Special” Netflix concert film, 2017 has not been a great year for her film career. She’s better than “Snatched,” as her work on any single episode of her terrific “Inside Amy Schumer” would prove.

The final scene, with characters dancing at the fade out, is a desperate way to leave the audience smiling as they leave. Watching your two stars dance goofily isn’t enough to make one forget how unpleasant their movie is.

Here’s a tip for making a jungle-set, kidnapping-themed movie: make sure your location looks genuinely menacing. At one point, Hawn and Schumer are trekking through vines and stop by a river to finish a heart-to-heart conversation; we’re supposed to think they’re in the throes of a deadly, unforgiving jungle but it looks so tranquil, you expect a hotel to be just out of the camera’s eye. Sure enough, most of this was shot on Oahu.

'Snatched' has no comments