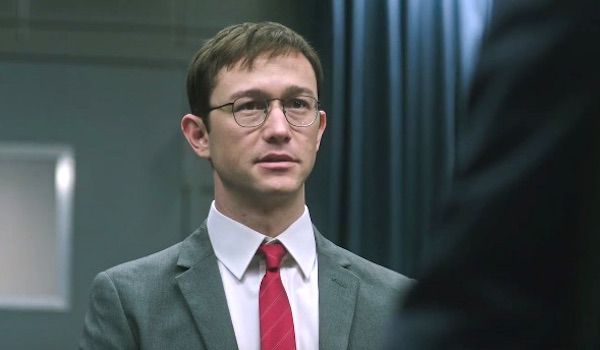 If you think Edward Snowden is a hero for leaking information that the National Security Agency collected on millions of American citizens, by all means check out SNOWDEN, the polished new movie from Oliver Stone, starring Joseph Gordon-Levitt. It’s a terriﬁc movie if you admire Snowden but just a well made piece of propaganda if you don’t.

When the ﬁlm begins, Snowden is a member of the Special Forces. After both his legs are broken in a military training accident, he’s disappointed to learn that he can’t continue as a soldier. But he’s a smart young man who ﬁgures he can serve his country by joining the C.I.A. There, he creates a couple of computer programs that help the agency. The programs are so successful, he gets a lucrative job offer from the National Security Agency. But soon after he goes to work at the N.S.A., he discovers its practice of spying on nearly anyone in the country.

The movie shows that before he got into the N.S.A., Snowden was a staunch conservative. His girl friend Lindsay, played by Shailene Woodley, is a liberal who can’t get him to join her in protesting against the Iraq War.

But once he realizes that the American government is secretly spying on its own citizens, he feels compelled to expose that truth.

The world knows that Snowden copied secret digital ﬁles and snuck them out of his workplace, and the movie does a ﬁne job of showing exactly how he managed to pull that off. It’s one of several parts in the ﬁlm where Oliver Stone’s visual ﬂair is especially effective.

Stone also recreates several of the scenes from the documentary, CITIZENFOUR, in which a ﬁlmmaker and two journalists secretly meet Snowden in a Hong Kong hotel room, so that he can give them many of those secret ﬁles, and they can get them out to the world before the U.S. government ﬁnds out where they are.

This movie clearly believes that it is Snowden’s idealism that motivated him to sacriﬁce his career and his personal life. Edward Snowden is in exile now, living in Russia unable to go anywhere else. But, it’s important to note that not even the American government claims that anyone has been killed as a consequence of all the classiﬁed materials he made public.

At the very end of the movie, the real Edward Joseph Snowden makes a brief appearance. Seeing him in front of the camera made me aware of how well Gordon-Levitt captured the man’s speech patterns and physical movements.

Whether you see Snowden as a hero or a traitor, it would be hard to deny that Joseph Gordon-Levitt does a great job in the title role.

Watch the trailer at:

'Snowden' has no comments